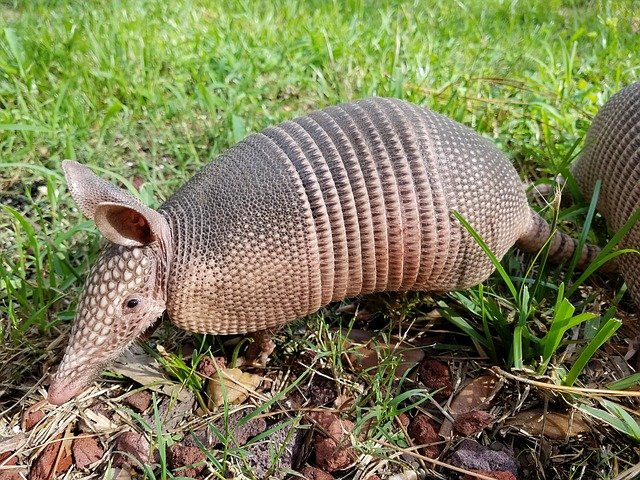 Can You Catch Leprosy from Armadillos?

You may have seen them on the side of the road, or even in your backyard. Armadillos are small, armored animals that can be found throughout the United States. While they may seem harmless, armadillos are actually one of the two mammals that can carry leprosy. But can you actually catch leprosy from an armadillo?

Leprosy, also known as Hansen’s disease, is a chronic bacterial infection that can cause skin lesions, nerve damage, and blindness. It’s a disease that is as old as mankind, and it’s thought to have originated in Asia or Africa.

Leprosy is spread through close contact with an infected individual, usually through contact with respiratory secretions, such as saliva or mucus. The good news is that leprosy is not very contagious.

Armadillos are the only other mammal besides humans that can carry leprosy. In fact, armadillos are the primary source of leprosy infections in the United States. Scientists believe that armadillos become infected with leprosy after coming into contact with contaminated soil.

The pathogen that causes leprosy, Mycobacterium leprae, is unique in that it can only reproduce inside of a living animal. This is why armadillos are such an important part of the leprosy cycle.

Can You Catch Leprosy from an Armadillo?

In the U.S., there are only about 150 to 250 cases of human infections reported each year. However, armadillos are found in every state except Alaska and Hawaii. So if you do come into contact with an armadillo, it’s important to wash your hands thoroughly and see a doctor if you develop any symptoms of leprosy.

How Common Is It to Get Leprosy from an Armadillo?

Very uncommon. This is because at least 95% of the human population has a natural immunity to leprosy. In addition, the pathogen that causes leprosy, Mycobacterium leprae, can only live in the goldilocks temperature inside the gut of an armadillo or a human.

The bacteria is also what experts call a “wimp of a pathogen” due to its fragility, it can’t survive outside of its host for more than a few hours. So the chances of you coming into contact with leprosy pathogen from the animal are very low.

But this doesn’t mean that you should handle armadillos without gloves. If you see one on the side of the road, or if one happens to wander into your backyard, it is best to leave it alone or call your local wildlife control office.

How Bad is Leprosy?

Leprosy patients were once shunned by society and were forced to live in leper colonies. While leprosy is not as feared as it once was, it is still a serious disease that can cause permanent damage.

In the United States, leprosy transmission is most commonly found in the southern United States, particularly, in Louisiana, Mississippi, and Texas. If not treated early, the disease can cause skin lesions, nerve damage, and blindness.

Is Leprosy Curable In Case of Exposure?

Yes, leprosy is curable in case of exposure. However, it is important to seek medical attention as soon as possible. The earlier the diagnosis, the easier it is to treat leprosy. The treatment usually involves a course of antibiotics, but in some cases, surgery may be necessary to correct deformities caused by the disease.

If you think you may have been exposed to leprosy, it is important to see a doctor right away. Early diagnosis and treatment is key to preventing serious complications from the disease.

How Common is Leprosy in Armadillos?

Leprosy is quite common in armadillos. In fact, according to the National Hansen’s Disease Program, at least 25% of the armadillo population in some places are infected with M. leprae.

Some armadillo species are also naturally infected with the M. leprae bacteria. This means they can spread the disease to humans even if they don’t have leprosy themselves. The pathogen thrives in its gut and is spread through contact with the animal’s bodily fluids or feces.

While the nine-banded armadillo is the primary source of leprosy infections in the United States, it is still a rare disease. There are only about 150 to 250 cases reported each year. And, with early diagnosis and treatment, leprosy is curable.

How Do Armadillos Spread Leprosy?

M. leprae, the bacteria that causes leprosy, is transmitted to humans through contact with the armadillo’s blood, tissue, or droppings. It can also be spread through lesions on the skin. The bacteria are thought to enter through cuts or scrapes in the skin.

It is also possible to contract leprosy from wild armadillos. This is why it’s important to avoid contact with them and to wash your hands thoroughly if you do come into contact with one.

Can You Get Leprosy from Eating Armadillo?

In Brazil, armadillos are a popular delicacy. Some eat armadillo at least once a week, and most say it tastes like chicken. But, can you get leprosy from eating armadillos?

Well, as 95% of human populations are immune to leprosy, and the pathogen easily dies when the meat is cooked, it is highly unlikely that you would contract leprosy from eating armadillo meat. However, there is a small risk of infection if the meat is not cooked properly, or, in the case of Brazilians, if the liver is consumed raw like in the dish Ceviche.

In the studies conducted, people who ate armadillo meat had higher antibodies for leprosy and thus may have had a higher risk for leprosy. So, while the risk of contracting leprosy from armadillos is low, it’s still best not to take chances and avoid eating exotic meats like armadillos.

How Can You Tell if an Armadillo has Leprosy?

There is no way to tell if an armadillo has leprosy just by looking at it. In order to determine if the animal is infected with the bacteria, it would need to be tested in a lab.

Armadillos don’t really live long enough to show any symptoms of the disease even if they are infected. Most armadillos die from predation or hunting accidents before they reach the age of five.

Can You Get Leprosy From a Dead Armadillo?

Compared to other diseases, the leprosy pathogen is quite fragile and easily dies when outside the perfect environment of a human or armadillo host. This means that it is highly unlikely that you would catch leprosy from the dead animal unless you’ve been exposed to the animal’s bodily fluids.

Even if you were to come in contact with an armadillo carcass, the risk of infection is low. However, it is still best that you wash your hands thoroughly if you do come into contact with one.

What Can You Do If You Come in Contact with an Armadillo?

If you come in contact with an armadillo, whether it is dead or alive, you should immediately wash the area with soap and water. If you develop any skin lesions or experience any other symptoms of leprosy, you should contact your doctor right away.

Can Dogs Get Leprosy from Armadillos?

Very unlikely. While dogs have their own strain of leprosy (canine leprosy), it is caused by a different bacteria and transmitted through bites of Sarcoptes scabiei, and not transmitted from armadillos.

There has been no reported case of a dog contracting leprosy from an armadillo. Leprosy is typically species-specific, which means that it can only be transmitted from one species to another of the same genus. The only exception so far is M. leprae which can be transmitted from armadillos to humans and vice versa.

Armadillos are a common sight and a nuisance in many parts of the United States. They are also known carriers of the M. leprae bacteria, which causes leprosy. This has led many people to wonder if they can catch leprosy from armadillos, and from what we saw, the answer is yes.

So, it is important to avoid contact with armadillos, whether they are dead or alive. If ever you see one digging through your trash or waddling through your yard, make sure to keep your distance and call wildlife control.