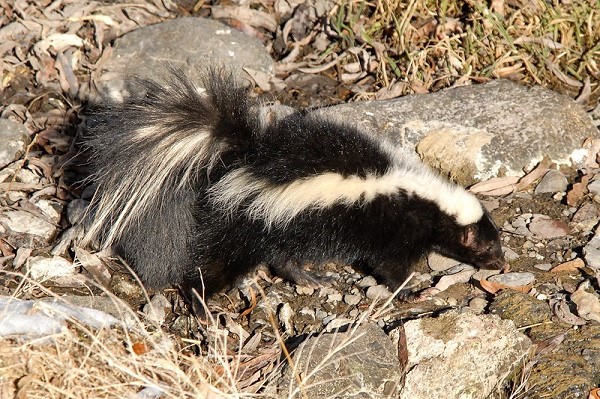 Animal territories are established to mark and defend an area where an animal lives. The size of a territory depends on the species of animal, as well as the availability of food and other resources. For example, a large animal like an elephant needs a much larger territory than a small animal like a mouse.

Skunks of the family Mephitidae are no exception. Skunks need such a large territory to find enough food to eat. If there is less food available, skunks would need a larger territory. But how far can their territory be?

How Far Is The Territory Of A Skunk?

The territory of a skunk can be up to 3 square miles. But skunks don’t just stay in one place. They move around their territory, looking for food. So this means that the actual size of a skunk’s territory depends on how much food is available. If there is an abundance of food, skunks will usually have a smaller territory.

You might be surprised to learn that the typical territory of a skunk is only about 1/2 mile wide. This may not seem like a lot, but it’s quite a large area for a small animal. A skunk’s territory includes a place to den, food and water sources, and enough space to find mates and avoid other skunks. Skunks are usually solitary creatures, only coming together to mate. However, some skunks live in small family groups. These groups typically consist of a mother and her offspring.

Skunks will mark their territory with scent glands near their tails’ bases. They will also spray urine and feces around the perimeter of their territory. This helps to keep other skunks away and defines the space as theirs.

A skunk’s habitat is usually in wooded areas, but it can also be found in fields, grasslands, and forests. Skunks like to live in suburban areas near humans because there is a lot of food available.

This includes garbage, pet food, and even insects. Skunks typically build their dens in abandoned burrows, hollow trees, or logs. They will also use man-made structures, such as crawl spaces under buildings.

Skunks will usually have several dens that they use throughout their territory. This gives them a place to rest and escape from predators.

How Far Do Skunks Travel?

Skunks can travel up to 0.5 to 2 miles in a single night! This is because they are nocturnal animals and do most foraging at night. During the day, skunks rest in their dens or travel to new areas. But during mating seasons, a male skunk can travel up to 5 miles each night.

Where Do Skunks Usually Roam?

Skunks roam their territories in search of food. They usually forage alone, but sometimes they will travel in small groups. This is typical during mating season or when raising young.

When skunks are looking for food, they will often dig through the ground in search of grubs and insects. They will also roam to find fruits, vegetables, nuts, and eggs. Skunks will also eat small mammals, such as mice and rabbits.

While skunks typically avoid humans, they will sometimes enter yards or gardens in search of food. They hide in porches or may even make it their habitats during winter. This can be a problem for homeowners, as skunks can be pretty destructive. They will dig holes in the ground and uproot plants in their quest for food.

Their native range is quite extensive, encompassing most of North America. This includes parts of Canada, the United States, and Mexico. Skunks can also be found in some Central American countries, such as Costa Rica.

While skunks are not typically found in South America, one species lives in Brazil. Skunks have also been introduced to other parts of the world, such as Europe and Asia. In Asia, they are called stink badgers. They only exist in the Philippines, Malaysia, Indonesia, and Java.

Skunks are fascinating creatures that have a lot of different adaptations. These adaptations help them to survive in the wild and live in their large territories. Skunks are essential animals in the ecosystem and play a role in controlling the population of insects.

Have A Skunk Infestation Problem?

Skunks are infamous for their nauseating spray. You can do a few things if you think you have a skunk infestation problem. First, try to identify the source of the problem. This will help you to determine the best course of action. If the skunks are coming into your yard in search of food, try to remove any attractants. This includes garbage, pet food, and bird seed.

While you can use methods independently, the fastest and most effective way is to call a pest control company like AAAC Wildlife Removal. This way, you can save energy and avoid contracting diseases from direct or indirect contact with them.

When these animals continue to linger around your property, it can be sickening because of the unpleasant odor and detestable stench. Remember to call AAAC Wildlife removal for safer and more efficient skunk removal.

How do I remove the repulsive and foul musk of skunk spray?

You can reek like a rotting animal if a skunk sprays you. Mixing hydrogen peroxide, baking soda, and dish soap can break down the proteins in skunk spray and remove the abhorrent and disgusting stench. Know that applying tomato juice is only a myth. It does not remove the putrid smell but only hides it. Once it loses the scent, the loathsome stench comes back.

How many young skunks can female skunks produce?

Female skunks can give birth to four to six kits or baby skunks. The gestation period is around nine weeks. They usually mate from late February to early March and give birth in May or June.

Learn more about other animals