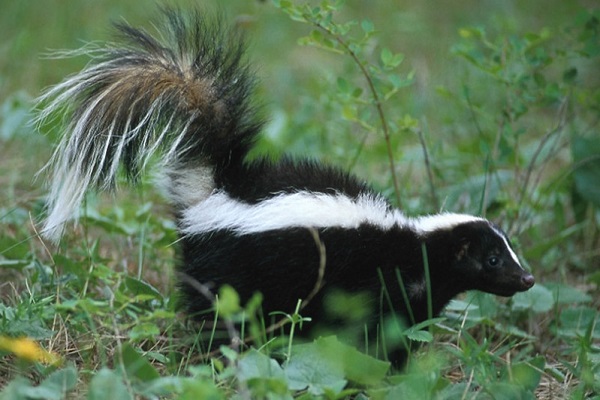 The gestation period or pregnancy period refers to the days an animal develops babies inside its womb. It can be as long as 23 months, like the gigantic elephants, or as short as 12 days, like the Virginian opossum.

Gestation happens after the most exciting mating season of all animals. This serves as them passing their outstanding characteristics and building a more prominent family in the wild. Skunks, which are nocturnal rodents of the wild, also are capable of reproduction and multiplication in their calm manner. So, how long do skunk babies develop after a successful mate with a partner? Let’s discuss it!

Mating for skunks happens during the early spring. This is also their breeding season, wherein both males and females actively search for a mate. But before anything else, let us first discuss how these nocturnal animals find each other in the wild.

It is part of their nature that when a male skunk wants to look for a mate, he will spray his scent in different areas. The female skunk will be able to smell his scent from a mile away. If she likes what she smells, she will follow the trail of his scent until she finds him.

When they finally meet, the male and female skunks will spend time getting to know each other by sniffing and touching each other with their noses. After they have decided they are compatible, the male skunk will spray the female with his scent to mark her as his mate.

Different factors can affect the length of a skunk’s gestation period. The average litter size is usually between 2 and 10, the most common being 4 to 6. A skunk’s reproductive cycle generally lasts from late January to September. After a female skunk mate, she will go through a 7 to 10-day heat period. Once fertilized, the eggs will take approximately 32 days to gestate.

So, the answer to how long a skunk is pregnant is about 32 days or a little over a month. Although their gestation period is short, they can have multiple litters in one year.

On average, a female skunk will have 2 to 3 litters per year, with each litter consisting of 4 to 6 baby skunks. So, if you see a lot of skunks in your area, it is probably because their population is growing!

As we have mentioned earlier, skunks mate during the early spring. But did you know that they can also mate in the fall? This is because female skunks can store sperm from their mate and use it to fertilize their eggs at a later time.

This means that a female skunk does not need to find a new mate whenever she wants to have a litter of baby skunks. She can mate once and then use the stored sperm to fertilize her eggs for the rest of her life!

Skunks usually give birth in May or June. However, if a female skunk mates in the fall, she will give birth in early spring. Baby skunks are born with blind eyes and deaf. They are also unable to spray their signature scent.

Mothers will take care of them until they are old enough to fend for themselves, usually around 6 to 8 weeks. After that, the baby skunks will start their own families!

If you have skunks in your backyard, you have to be careful. This is the time when baby skunks are born. They are more vulnerable and prone to being attacked by predators. They are also more likely to be hurt. So, if you have skunks, it would be best to avoid them during this time.

If you want to get rid of skunks, you can use traps. But trapping skunks is not easy. You need to know where they are. Once you trap them, you need to release them in an area where they can’t harm people.

The skunk mating season is from late February to early March. This is also the time when they are most active. If you see a lot of skunks during this time, it is because they are looking for mates.

The adults and sexually mature skunks mate as much as they can. This allows them to spread their genes to more offspring and increases their chances of passing them on to future generations. This can be different for other species, though. But the most common striped skunk is polygamous.

Skunks are not social animals but are solitary. They only get together when they’re searching for a mate, or they’re already mating. But, after that, female and male skunks go on their own. In addition, during mating season, male skunks can travel long distances to find mates. So, if you see a skunk in your backyard, there’s a chance it’s looking for a mate, not just food.

The average number of babies that skunks have

Skunks give birth to litters of 2 to 10 young skunks. The most common litter size is 4-6. This is relatively small compared to other animals, but this is also reasonable. A huge number of babies will result in severe competition, leading to ecosystem conflicts and massive population density.

Skunks have a moderate reproductive rate, and their litter size is not too large. This allows them to produce enough offspring to keep their population stable, but not so many that they become a nuisance.

Baby skunks are born blind, deaf and very vulnerable. This makes them classified as altricial babies. They are also unable to spray their signature scent. But unlike other precocial babies, skunks are not born naked. Instead, they are born with a fine layer of fur that helps keep them warm. Their mother will take care of them for the first few weeks of their lives, but after that, they are on their own.

Need Help With Skunks Infestation On Your Property?

Skunks may choose the best spot for their dens anywhere in your home. They could hide under your porches, decks, garages, sheds, and attics. They will also rummage through your garbage bins in search of food and burrow in your ground in search of insects, grubs, and rotten fruits. When this happens, they can inflict damage and pose a threat or danger to your health.

Skunks can be challenging to deal with on your own, and if you’re not careful, you could get sprayed. If you want to get rid of the skunk problem, call AAAC Wildlife Removal. Our experts will be able to help you get rid of skunks quickly and safely.

AAAC Wildlife Removal does not just remove skunks. We also specialize in removing raccoons, opossums, and even birds that cause structural damage. And, we don’t just cater to homeowners too. We will be there for you whether you own buildings or other property types!

Reproduction is vital for all animals. It ensures that their species will continue to thrive and that their genes will be passed on to future generations. A mother skunk has a moderate reproductive rate and usually births litters of four to seven pups. This is a reasonable number since they are terrestrial animals. If their kits or babies go beyond that, like a hundred, for instance, then they become a nuisance. Knowing these animals may roam around suburban areas.

A skunk on your site can be pretty bothering. Remember to call AAAC Wildlife Removal, the second largest pest control service in North America, for efficient pest removal services. Our company will make an immediate difference.