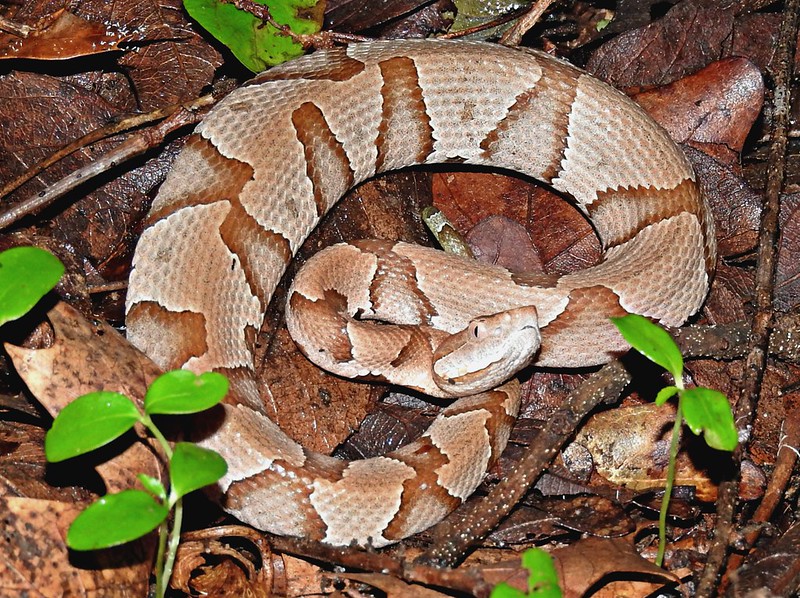 Do copperheads swim? This is a question that many people want to know the answer to, especially since these snakes are notorious for being found near bodies of water.

People are often afraid of snakes, and the copperhead is one of the most feared snakes in North America. Many people think that because copperheads are often found near water, they must be good swimmers. But can they really swim?

A copperhead snake is a venomous snake included in the pit-viper family. These snakes get their name from the copper-colored head, which is often darker than the body. Copperheads are known to be one of the most venomous snakes in North America. These snakes are venomous and can cause life-threatening injuries.

Copperhead snakes tend to be found in wooded areas near streams or rivers. They are often seen basking in the sun on rocks or logs near the water’s edge. They are found in the Eastern or Southeastern United States.

So, Do Copperheads Swim?

The short answer is, yes. Copperheads are known to be good swimmers. In fact, they are often seen swimming in ponds and streams. While these serpents are good swimmers, they are not as good at it as some other types of snakes.

These snakes swim on top of the water with their head elevated above the surface. They use their tail as a rudder to help them swim in a straight line. Copperheads rarely go underwater compared to water snakes like cottonmouth snakes.

There are many different types of water snakes, but copperheads are not one of them. Many mistake copperheads for water snakes because they are often seen swimming in lakes and rivers.

Water snakes are a type of non-venomous snake that is adapted to living in or near water. They have special adaptations that allow them to live and thrive in these aquatic environments. Water snakes often have flattened tails that help them swim and they can also stay submerged for long periods of time.

Copperheads, on the other hand, do not have these same adaptations. While they are good swimmers, they are not adapted to living in water like water snakes are.

Making yourself familiar with what a copperhead snake looks like is the best way to avoid being bitten by one. These snakes are usually brown, reddish-brown, or beige in color and have hourglass-shaped crossbands that are darker in color than their bodies.

The heads of these snakes are triangular in shape with slim necks, and they have elliptical pupils. The head is also usually a bit darker than their bodies. Copperheads can grow to be about two to three feet long, but some may be larger.

Juvenile copperheads have lighter coloration than adults and often have yellow tails. These snakes will also usually have a dark line running down the center of their backs. As they grow older, their coloration will become darker and their tails will turn brown or black.

Copperheads use their coloration as camouflage, so they can be difficult to spot. If you are hiking in an area where these snakes are known to live, be sure to wear long pants and boots to protect yourself.

Copperheads are found in a variety of habitats throughout the United States. These habitats include woodlands, swamps, marshes, and rocky hillsides. Copperheads are often found near water sources such as streams, rivers, and lakes.

In the northern part of their range, copperheads will hibernate in dens during the winter months. These dens can be located in a variety of places, such as beneath rocks, in stumps, or in abandoned animal burrows.

Where Do Copperheads Nest?

Copperheads build their nests near water sources so their young have a reliable food source when they hatch. The female copperhead will often mate with multiple males and then give birth to live young in the late summer or early fall.

Female copperheads will often fight with potential mates and will only mate with the males that they deem worthy. After mating, the female copperhead will store the sperm in her body and delay fertilization until she is ready to lay her eggs.

Females will typically give birth to between four and eight young snakes, but some may have up to 20. The young copperheads are about eight up to ten inches long at birth and are independent of their mother immediately.

Do Copperhead Snakes Hang Around Water?

Copperheads are often found near water, their menu of small amphibians, reptiles, and mammals requires it. While they are not true water snakes and don’t spend a lot of time in the water, they will enter to hunt or cross if necessary.

Animals that live near water sources that copperheads eat include:

Like all snakes, they cannot produce their own body moisture so they must rely on external sources to stay hydrated. They don’t like to be far from a water source for this reason.

Summertime is the peak of the hunting and breeding season for most snakes, including copperheads. This is when they are most active and you are most likely to see them out and about. If you’re spending time near water this summer, be sure to keep an eye out for these venomous snakes!

Copperhead snakes are not water snakes, which means that they cannot breathe underwater. They must come up to the surface to breathe every few minutes. These snakes have special valves in their nostrils called glottis that close when they go underwater so they can stay submerged for longer periods of time.

Even though these snakes can’t breathe underwater, they are still excellent swimmers. So, be wary of ponds and lakes where these snakes might be lurking!

Can A Copperhead Snake Bite You In The Water?

Copperhead snakes, even though they are not true water snakes, are still venomous and can bite you even when they are underwater. If you’re swimming in a body of water and you see a copperhead, it’s best to get out of the water as quickly as possible.

Even though copperheads are not aggressive, they will still bite if they feel threatened. So make sure to give it a wide berth should you find one in a body of water.

How Do Copperheads Eat When They’re In The Water?

Through a special adaptation to the snake’s trachea, copperheads can open their mouth and eat without getting water in their lungs. This adaptation allows them to eat amphibians, reptiles, and mammals that live in or near the water.

While copperheads don’t spend a lot of time in the water, they are excellent swimmers and can stay submerged for long periods of time. So if you’re swimming in a body of water, be sure to keep an eye out for these venomous snakes!

It is never a good idea to try and remove a copperhead snake from your property on your own. These snakes are venomous and can cause serious injury or even death if they bite you. If you have a problem with copperheads on your property, the best thing to do is to call a professional snake removal company.

Snake removal is one of our specialties here at AAAC Wildlife Removal. We have the experience and the equipment to safely remove these snakes from your property. Give us a call today to schedule a consultation!

While they are not true water snakes, they are good swimmers and can often be found near water sources such as rivers, lakes, and streams. So, if you’re spending time near water, be sure to keep an eye out for these venomous snakes!

Just like with any other snake, if you see a copperhead swimming in the water, it is best to leave it alone. Even though these snakes are not aggressive and will only bite if they feel threatened, be mindful of your surroundings and take caution. So, enjoy watching these amazing creatures from a distance, and don’t forget to appreciate all the benefits that snakes provide to our ecosystem!