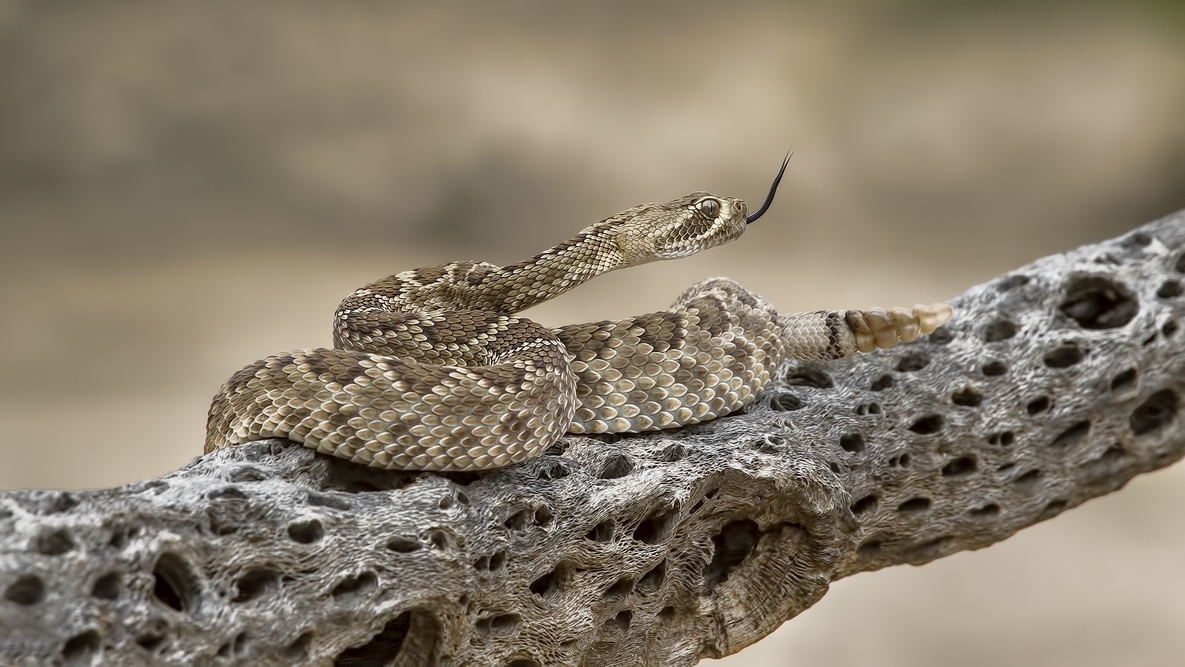 The rattle and its rattling sound is the rattlesnake’s most distinguishing feature. The snake uses it as a way to warn off predators and to communicate with other snakes. But have you ever wondered what the rattle is made of and how exactly it works? Well, you’re in luck, because today we’re going to explore the anatomy of a rattlesnake rattle!

Rattlesnakes are a type of venomous snake that is found across North to South America. They are members of the viper family and are distinguished by their triangular heads, heat-sensing pits, and of course, their rattles.

A rattlesnake can grow to be anywhere between two to eight feet long, with the average being around three feet. In general, rattlesnakes have thick bodies with keeled scales. Their coloration can vary depending on the species, but they are often some combination of brown, gray, or black.

So, What’s in a Rattlesnake’s Rattle?

Somebody actually tried cutting open a rattlesnake rattle to find out and thankfully documented it so we don’t have to. The rattlesnake rattle is made up of a series of keratin scales that are loosely connected at the base. These scales are hollow and filled with air, which is what makes them light enough to shake.

The Anatomy of a Rattlesnake Rattle

Now that we know a little more about what rattlesnakes are and what their rattles are made of, let’s take a closer look at the anatomy of a rattle. Rattlesnake rattles are actually an extension of the snake’s tail and are made up of two parts: the base and the segments.

The base is the bottom part of the rattle and is attached to the rattlesnake’s tail. The segments are the hollow, air-filled scales that make up the rest of the rattle. Rattlesnakes can have anywhere from two to twelve segments, with most having around seven or ten.

How Does the Rattle Work?

When the snake feels threatened, it will contract its muscles and shake its tail. This causes the segments of the rattle to knock against each other and produce that distinct sound.

Rattlesnakes use the muscles in their tails to control the movement of their rattles. By doing this, they are able to produce different patterns of sound that can be used to communicate with other snakes or to warn predators to stay away.

What’s The Purpose of the Rattlesnake Rattle?

The rattlesnake’s rattle serves a single purpose: to warn potential predators that they are too close and to stay away. The sound of the rattle is unique and can be heard from far away, making it an effective way to warn other animals to stay away.

The rattling noise along with its hissing sound is enough to convey the message that the snake is not to be messed with. Rattlesnakes are generally shy creatures that would rather avoid conflict. The rattle is their way of avoiding a confrontation by warning potential predators to stay away.

Do Rattlesnakes Always Use Their Rattles?

Rattlesnakes use their instincts to know when to rattle and when not to. For the most part, a rattlesnake will only rattle when it feels threatened. If they are hunting for prey, they will not want to make any noise that would give away their location. They will use their color as camouflage instead and rely on their heat-sensing pits to help them find their food.

Do Rattlesnakes Rattles First Before Striking?

Rattlesnakes will almost always give a warning before they strike. This is because they would much rather avoid conflict than have to fight. The rattlesnake will first try to scare off its predator with its rattle. If that doesn’t work, it will then coil up and prepare to strike.

The segments can also come loose if the snake rubs up against something hard, like a rock or a piece of wood. If this happens, the segments will usually grow back when the snake sheds its skin.

There are a number of different species of rattlesnake, and they can be found across North and South America. Rattlesnakes are venomous snakes, which means that rattlesnake bites are not to be taken lightly. Rattlesnake venom is a mix of different toxins that work to break down tissue, affect blood clotting, and cause pain. If you are ever bitten by a rattlesnake, it is important to seek medical attention immediately.

These rattlesnakes are the largest of all the rattlesnakes. They can grow to be up to eight feet long and their venom is very potent. These heavy-bodied snakes have a diamond-shaped pattern on their backs and can be brown, gray, or black in color.

The western diamondback rattlesnake is slightly smaller than the eastern diamondbacks, and they have a more light-colored body. However, they are the longest of all the rattlesnakes and can grow up to eight and a half feet in length.

The Mojave green rattlesnake is one of the most venomous snakes in North America. They are found in the Mojave Desert. They are often mistaken for the eastern diamondback because of their similar coloration. However, Mojave greens have a bright greenish-yellow tail that they use to lure prey.

The eastern massasauga is a small but thick rattlesnake that is found in the eastern United States. They are gray or brown in color with dark blotches down their back. These snakes only grow to be about two and a half feet long, and their venom is not as potent as some of the other rattlesnakes.

The pygmy rattlesnake is the smallest of all the rattlesnakes. They are found in the southeastern United States. These snakes only grow to be about eighteen inches long and their venom is not as strong as some of the other rattlesnakes. They have different colorations depending on where they are found, but they often have a brown or gray body with darker bands down their back.

These are the most common rattlesnake species, but there are many other less common types of rattlesnakes. If you are ever in an area where rattlesnakes are known to live, it is important to be aware of your surroundings and to avoid these dangerous snakes.

Do You Have A Snake Problem In Your Property?

If you think that you might have a snake problem on your property, the best thing to do is to contact a professional snake removal service. These experts will be able to identify the type of snake and determine the best way to remove it from your property.

At AAAC Wildlife Removal, our experts are trained in snake removal and can help you get rid of any unwanted snakes on your property. We also offer a number of other wildlife control services, such as bat removal and raccoon removal. Contact us today to learn more about our services or to schedule a consultation.

Rattlesnakes are definitely interesting and unique animals, and their rattles are one of the things that make them so special. The rattle is an amazing and essential part of a rattlesnake’s survival.

What’s more interesting is knowing the rattle is nothing more than modified scales that have evolved over time to create the loud noise that we associate with these creatures. So, next time you see a rattlesnake, be it on a hike or in your backyard, take a moment to appreciate the incredible adaptation that is the rattle!