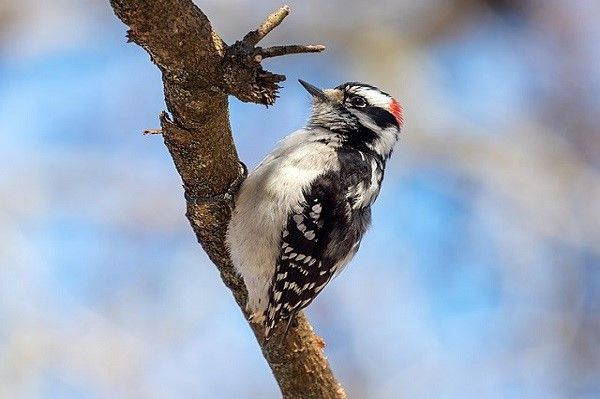 Woodpeckers are fascinating creatures that are known for their wood-pecking habits. They are members of the Picidae family, along with sapsuckers, wrynecks, and piculets. These birds consume insects that bore on trees, which helps control these pests. Some woodpeckers will also eat fruits, nuts, and sap.

While most people are familiar with how woodpeckers peck, few know much about their nesting and breeding habits. So, when do woodpeckers lay eggs?

When do woodpeckers lay eggs?

Woodpeckers generally lay their eggs between late April and early May. The female will excavate a nest hole in a tree, often using her bill. She will then line the nest with wood chips before laying her eggs.

The number of eggs laid depends on the species of woodpecker, but it is usually between four and eight. The eggs are incubated for about two weeks before the chicks hatch.

Both parents will care for the young, which leave the nest after about four to six weeks. Species like the Pileated Woodpeckers lay 3 to 5 eggs, with historical records pointing to 4 eggs being common.

Woodpeckers produce eggs by internal fertilization, meaning the egg is fertilized inside the female. Like reptiles and birds in general, woodpeckers have a cloaca as a single exit and entrance for sperm, eggs, and waste.

The cloaca is the reproductive and excretory opening, located at the base of the woodpecker’s tail. During copulation, which only lasts a few seconds, the male will insert his cloaca into the female’s and pass on sperm. The eggs are then fertilized by this sperm inside the female’s body then, the hard shell develops.

These eggs will have a fluid-filled amnion, a thin sac membrane enclosing the embryo. Once the eggs are ready, the female will lay them inside their prepared nest holes.

Woodpeckers exhibit interesting behaviors during their breeding season. During their courtship, they may touch bills, swing heads, fly slowly, and exaggerate their drumming.

Other than that, there can be intermittent copulations and extreme pecking exhibitions. While most birds give vocal exchanges in search of a mate, woodpeckers do not. They could do it, but their mating call is through drilling and drumming.

Species like the red-bellied woodpecker drum simultaneously during mating calls. Along with them, red-headed woodpeckers turn out to be interesting too. They engage in a reverse mounting, meaning the female mounts first before the male follows.

The mating process of woodpeckers starts with the male finding a suitable tree for his nest. After that, he will attract female ones using an aerial display. They will also use a series of drilling and drumming to impress their mate.

Once pairs are made, they will work together to excavate their nesting cavity, which usually lasts about two weeks. After that, the female will lay her eggs and incubate them for 12 to 16 days. And then, both parents will take care of their young until they are old enough to leave the nest, around 4 to 6 weeks.

Woodpecker eggs are incubated for 12 to 16 days, depending on the species. The female will do most of the incubation during this time, but she swaps the role with the male woodpecker from time to time to look for food.

After hatching, the young are born naked and helpless- altrical in scientific terms. Both parents will care for them, feeding them insects until they are old enough to leave the nest. This takes between 4 and 6 weeks.

How Many Eggs Do Woodpeckers Lay?

Woodpeckers lay about 3 to 8 eggs per clutch but vary in species. For example, The Pileated Woodpecker, the species largest, can lay 3 to 5 eggs. While the Northern Flicker, the species smallest, typically lays 5 to 7 eggs. This can be due to factors like the environment and habitat.

How Long Do Baby Woodpeckers Stay in Their Nests?

Baby woodpeckers, also known as chicks or nestlings, stay in their nests for 4 to 6 weeks. During this time, they are fed by their parents and grow until they are ready to leave the nest and fend for themselves.

Woodpeckers can cause unsightly holes in your sidings. They leave traces of their food search and even pose a risk for diseases. If you want an immediate solution for removing woodpeckers, we at AAAC Wildlife Removal can assure an efficient one-call-away service.

With more than two decades of service, we provide top-of-the-line experience and highly-skilled specialists. Get a quote now, and let’s rid your property of these bird pests.

Then, the pairs mate, and males deposit sperm through the cloaca. Once successful, the female eggs are fertilized inside and laid on nest holes when ready. These soon-to-be drillers are incubated for about 12-16 days. Once hatched, both parents fend for them for the entire 4-6 weeks until they become mature enough to be independent.

How Many Times Do Woodpeckers Mate In A Year?

There is only one mating season for woodpeckers in an entire year. But woodpeckers can mate and produce broods twice within the April-May breeding season.

Where Does A Woodpecker Make Its Nests?

Woodpeckers prefer to make their nest cavity on tree trunks, with dead trees as favorable. But since these are not always available, they nest on man-made structures like buildings and houses. They may also use birdhouses if available.

Do Woodpeckers Use the Same Nest Each Year?

Woodpeckers generally build new nest cavities every year. The old nests are usually abandoned and left to decay since they can be infiltrated with dirt and other materials over time. However, some species of woodpeckers will reuse their nests. This includes the Red-headed Woodpecker and the Northern Flicker.

Do woodpeckers face predators in their nests?

Nesting birds are prone to being prey against other animals in the wild. They may encounter squirrels, raccoons, snakes, and other birds of prey.