Groundhogs (or woodchucks or whistlers) dig up yards and eat crops. They dig their burrows next to your home or under your deck and ravage your garden. Unless they’re predicting the end of the winter, it’s understandable why homeowners would want to get rid of them. 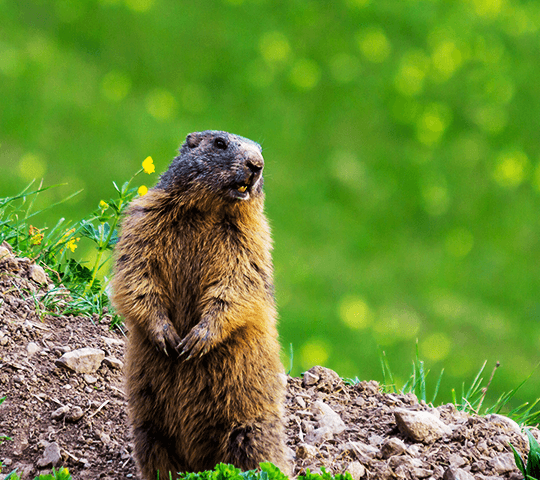 Groundhogs are thick, stocky mammals with flat heads, a short, round nose and short legs, tiny ears and bushy tails. Adults are about 2 feet long and weigh around 8 pounds. Their fur comes in a range of yellow-grays and browns.

Groundhogs look for soft ground where they can build their dens, which can become quite large and elaborate. They may have five or more entrances. They usually pick open areas with a lot of vegetation nearby.

Groundhogs are herbivorous. They will eat more than a pound a day of grasses, berries and whatever can be found in your garden or field. They may occasionally snack on grubs, insects and snails. They are mostly active during the day and sleep at night.

Groundhogs are a fairly long-lived rodent, living about six years in the wild. They also take their time in reproducing, usually becoming sexually mature in their second year.

They hibernate and wake up in March and April, at which point breeding season can begin. A female is pregnant for about a month. The male will stay with her until she gives birth to a litter of 2 to 6. She then nurses her young for about six weeks, at which point they leave to build their own dens.

Groundhogs dig elaborate dens with up to five entrances that cover up to 50 feet. They live, hibernate and raise their young in their dens. That is also where they run to when they are in danger. They emit a variety of vocalizations, for which they gained the nickname “whistler.”

Groundhogs aren’t generally a threat to humans. They can carry tularemia (which they can transfer if handled bare handed) and rabies (transferred through their bite). They can however carry parasitic worms, fleas and ticks that can in turn transfer to nearby humans and pets.

The burrows and feeding habits of groundhogs can cause significant damage to human-built structures, crops and gardens. The holes they create can be a hazard to farm animals and equipment. Since they hibernate, they may gorge on human-grown food and vegetation. They also gnaw on wood to sharpen their teeth.

Blocking off their holes won’t work with groundhogs as they will usually dig them up again or even dig a new hole.

Groundhogs can be either captured and relocated or trapped lethally. The equipment required for this should be handled by a trained and certified AAAC Wildlife Removal specialist to prevent both injury and the risk of catching disease. 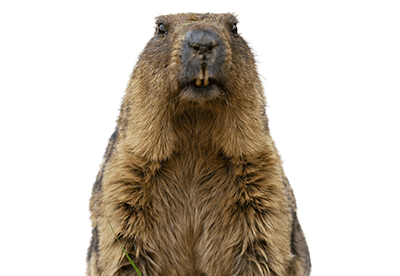 Groundhogs tearing up your yard? We can help! Select your state below to find a qualified AAAC Wildlife Removal Pro near you!

Groundhogs got you nervous?
We can help!