These fellas may look cute and cuddly, but don’t underestimate them. Raccoons have strong hands and a clever nature, a combination that helps them to get in all sorts of trouble in and around your house. They love to rummage through your trash, steal pet food left in the open, and dig through your flower beds. Raccoons usually den in trees and other outdoor spaces, but their favorite spot is in your attic! 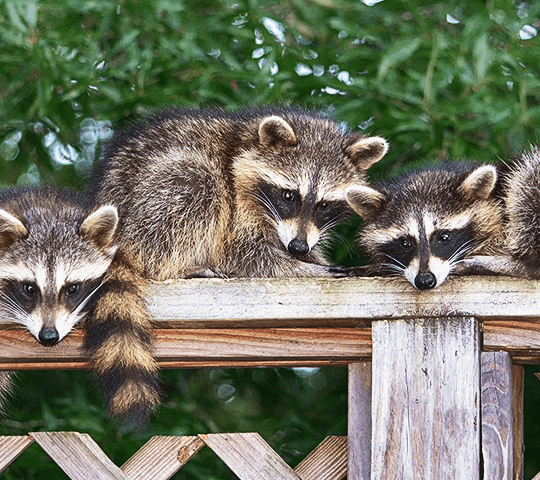 Raccoons are covered in grey fur and have their iconic black markings in the shape of a burglar’s mask around their eyes. They have fluffy tails with dark bands going down them.

Raccoons have tiny black noses on the end of their narrow snouts, small ears, and black eyes.

They often look like they hunch around because their front legs are shorter than their back ones.

Adults weigh between 10 to 30 pounds, with some reaching over 40 in rare cases.

In the wild, they can live up to 12 years, but most live only 5-6. Raccoon mating season happens around December, with mother’s giving birth to litters of 3-5 young during the Spring.

Raccoons are mostly nocturnal, but it is possible to spot them during the day when they’re out looking for food. They are omnivores, and will eat whatever they can get their greedy little hands on!

Raccoons are quite common in rural, suburban and urban areas. They have nimble hands and are quite strong for their size, making it easy to open latches and turn door knobs.

They have no problem tearing obstacles apart so they can get access to places to eat or den.

They don’t tend to be aggressive toward people, but a mother will get mean when defending her young.

Raccoon droppings are very dangerous because they may carry Raccoon Roundworm. Its possible to catch this by breathing in the spores that emerge from raccoon waste in your walls and attic.

Raccoons can also spread canine distemper, which can be fatal to man’s best friend.

And, of course, Raccoons are a common rabies carrier.

While trying to gain entry into your attic or chimney, a raccoon might destroy roof tiles or tear up wiring. Once inside, they can do more Int. Damage while trying to access different zones in your house.

In your yard, raccoons might break plants or strip fruit or vegetable plants overnight. There’s nothing they won’t eat, so your garden is their buffet.

They will eat sweet corn right off the cob and other grains, so farmers beware. An unlocked chicken coop is basically an open door, as the raccoons can easily open latches and then kill birds and destroy nests and eggs.

Raccoon waste in your attic or walls might be toxic (not to mention disgusting!) so make sure it doesn’t stick around after you clear out your raccoons.

Live trapping and relocation aren’t always an option with raccoons due to them being protected as fur bearing animals. Some states also give them extra legal protection as game animals.

In some states, it is illegal to transfer and release captive animals in 2nd locations other than the capture site. Only licensed trappers and certified wildlife specialists can remove problem raccoons outside of the regulated season.

Once your wildlife technician removes your raccoons, you need to make sure that new house guests can’t get in. The right fencing solution, chimney cap, or other barrier will keep this problem from happening again.

Our friendly AAAC Wildlife Removal specialists are qualified to make damage repairs and seal these entry points so you don’t have to worry about your furry friends making a repeat visit! 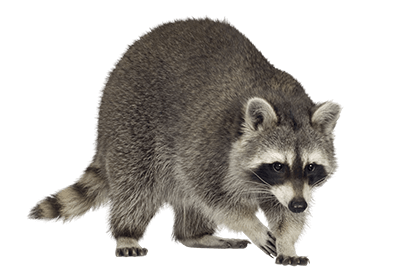 Raccoons living in your attic? We can help! Select your state below to find a qualified AAAC Wildlife Removal Pro near you!

Raccoons got you nervous?
We can help!