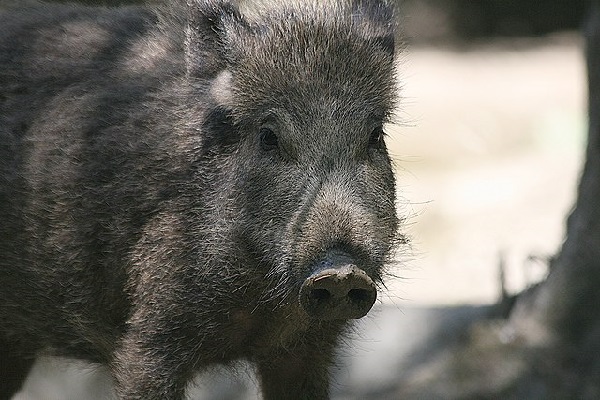 Wild boars, also known as the Eurasian wild pig or wild pigs alone (Sus scrofa), are the sizes of small to medium-sized pigs, but with tusks! Their bodies can measure up to six feet long and weigh anywhere from 50 to 300 pounds. Males tend to be larger than females.

While most wild boars will stay around this size, some are known to grow much larger. The biggest wild boar on record was shot in 1916 and weighed in at a whopping 800 pounds!

How does this compare to the average domestic pig? Well, full-grown pigs can weigh anywhere from 250 to 600 pounds. So, while wild boars are certainly smaller than their domesticated cousins, they can still get pretty big!

Let’s find out the different sizes of wild pigs! There are several species of wild boars. Did these sneak peek facts adrenalize your curiosity?

Wild boars and the entire pig population can grow in enormous proportions. This is influenced by food availability, genetic disposition, and living environment.

Certain subspecies play a remarkable image in the family among the wild boar population. Let’s get to know more about them!

The Carpathian boar is one of the largest and heaviest recorded wild boars. It is also called the European Forest hog or Giant Forest Hog. Unlike domestic pigs, these animals are found in European woodlands, from Spain and France to Russia and Romania.

Males of this species can weigh up to 400 pounds, while females usually max out at around 250 pounds. However, when these animals are met with an abundant carnivorous diet, they can be as heavy as 800 pounds or more. Young Carpathian Boars can weigh as little as 20 pounds, while juveniles can reach up to 150 pounds.

Carpathian boars have dark brown or black fur and have longer lacrimal bones or eye sockets.

The Ussuri boar is a subspecies of wild boar that is found in the forests of northeastern China, Russia, and Korea. It is also known as the Russian Forest hog or the Amur boar.

Giant Forest Hogs were once thought to be the largest. But it turns out it’s the Ussuri Boars. Ussuri boars have dark brown or black fur, and their bodies can measure up to seven feet long. Males can weigh up to 600 pounds, while females usually max out at around 400 pounds.

Baby Ussuri Boars can weigh as little as 30 pounds, while juveniles can reach up to 200 pounds.

The Middle Asian boar is a subspecies of wild boar found in the Kazakhstan, Uzbekistan, and Turkmenistan deserts. It is also known as the Central Asian boar.

Similar to other subspecies of wild boar populations, Middle Asian Boars can grow in unbelievable sizes depending on the environment, food source availability, and what these pigs eat. The more they consume food than their diet, the more likely they’ll grow larger.

On average, Males of this species can weigh over 400 pounds. Most Middle Asian boars have light gray coats rather than dark hair.

While we inform ourselves of the largest wild boar subspecies, an unimaginably enormous wild boar is on a claim to existence. In 2004, a surprisingly 12-foot big boar was in talks on the internet. This mysterious animal was said to be over 1000 pounds.

There’s only a single photo of this animal, taken by Chris Griffin, from south of Georgia. However, this was not submitted as solid evidence for its blurry shot.

Afterward, National Geographic professionals and experts examined the claims. They concluded that the Hogzilla might be over 800 pounds and at least 8 feet long. But this is as close to its actual size as we’ll ever get to know.

What is the size of a baby wild boar?

Now we know a full-grown wild boar’s average size and weight. Let’s find out how big they are when they’re born. The wild boar piglets, as we commonly call it, can weigh between 2 to 4 pounds at birth.

Piglets are also born with a thin layer of hair on their bodies, eventually growing into the thick fur we see on adult wild boars.

What is the size of a juvenile wild boar?

Juvenile wild boars or feral hogs have not yet reached sexual maturity. They are usually between 6 and 12 months old and weigh 150 to 200 pounds.

At this stage in their lives, juvenile wild boars are still growing and gaining weight. They will eventually reach their full size and weight when they reach sexual maturity, usually around 2 to 3 years old.

Standing on their foot up to their head, juvenile wild boars can be as tall as 1.5 feet.

What is the size of an adult wild boar?

Wild boars are one of the biggest subspecies of pigs in the world. They are usually dark brown or black and have thick fur. Males can weigh

Adult wild boars are usually between 2 and 3 years old and are considered sexually mature at this age. This is the stage in their lives when they can reproduce and have offspring.

How big can a full-grown wild boar get?

As we’ve seen, wild boars can grow quite large, depending on their subspecies and environment. The largest recorded wild boar was a Ussuri boar that weighed over 600 pounds and measured 7 feet long.

However, there have been some reports of wild boars weighing over 800 pounds. The largest recorded wild boar was a Ussuri boar that weighed over 600 pounds and measured 7 feet long.

While there are no reliable reports of wild boars weighing over 1000 pounds, it’s not impossible for them to reach this size. If they have access to plenty of food and live in an ideal environment, they could potentially grow to be this large.

Pigs and other members of their wild counterparts are highly intelligent creatures known to be very friendly and social animals. In the wild, they live in groups called sounders. A group of pigs is also called a passel or a drove.

A sow (an adult female pig) will usually lead the pack, and the rest of the pigs will follow her lead. The pigs in a sounder will stay together for protection and only leave the group to mate.

You may not believe this, but pigs are very clean animals in their natural state. They usually spend a lot of time grooming themselves and wallowing in mud or water to cool down and protect their skin from the sun.

Pigs are omnivores, meaning they will eat plants and animals. Their diet consists of roots, fruits, seeds, insects, small mammals, and reptiles in the wild.

Need Help With Wild Boar On Your Property?

Wild boars are not as calm and friendly as domesticated pigs. If you have wild boars on your property and are unsure what to do with them, AAAC Wildlife Removal can help. We are a team of experts that specializes in dealing with nuisance animals.

We will safely and humanely remove the wild boar from your property and relocate them to a place where they will be safe and cause no damage.

Call us today, and we’ll be happy to help you with your wild boar problem!

So, how big is a full-grown wild boar or wild swine? It all depends on the subspecies and environment! The world record for the largest wild boar is an astonishing 800 pounds. However, some subspecies can grow even larger than this in ideal conditions.

There are various speculations and theories about the biggest wild boars ever caught. But the fact is, we will never know for sure how big they can get!

Remember that if you have wild boar on your property, the best thing to do is call a professional wildlife removal company like AAAC Wildlife Removal. We will safely and humanely remove the animals for you, so you don’t have to worry about them anymore.

Wild boars are omnivores as they consume plants and animals as part of their diet. Some of the items that wild boars eat include roots, fruits, seeds, insects, small mammals, and reptiles.

You may think that domesticated pigs are herbivores, but they’re not! They have the same diet as their wild counterparts.

A wild boar is a large, stocky mammal with a short leg and a long body. They have a thick coat of fur that is usually black, brown, or reddish. The male wild boars (also called boars) have tusks that can grow up to 12 inches long.

Like their domesticated counterparts, they have hair that appears as bristles, a short tail, a cone-shaped nose or snout, hairy ears, and thick hooves.