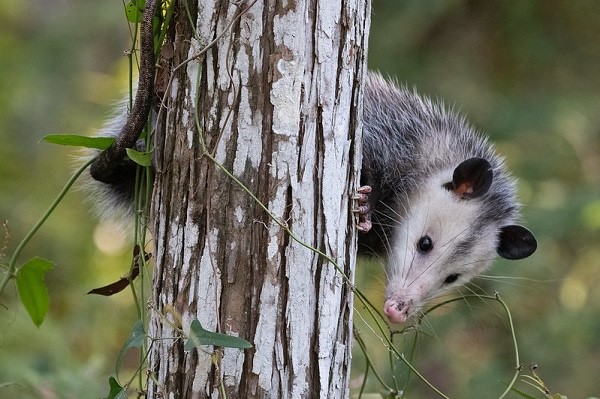 Possums are often considered pests, and it’s definitely for a good reason. These furry little creatures can carry many diseases that harm humans and other animals. The diseases can range from mild to severe infections and, worst case, be incurable and deadly.

The usual transmission mode is through contact with possum feces, which can contain many harmful bacteria and parasites. But they can also send infections through their ticks, urine, scratches, and bites. Let’s do an in-depth exploration of the different bacterial infections and find out ways to prevent transmission!

The Different Diseases that Opossums Can Transmit to Humans

Opossums become the most dangerous when they carry infection or deadly bacteria. This does not just spread within their kind but to pets and humans too.

Opossums remain unscathed from the barbaric rabies virus, thanks to their body temperature and high immunity. But they unfortunately still serve as hosts to different parasites and bacteria.

Here are the different diseases and infections brought by these marsupials:

We’ve heard of tuberculosis as a deadly lung infection spread from person to person through droplets released from coughs and sneezes. But, this can also actually be transmitted from possums in the same way. Through their bodily fluids such as saliva, urine, and feces. The bacteria that cause this is Mycobacterium Bovis, usually found in the intestines of possums and other animals.

Tuberculosis in humans usually manifests as a persistent cough, fever, chest pains, and weight loss. Transmission of this disease usually happens when people come in contact with contaminated possum feces or if you have close contact with an infected possum, like if you’re caring for one.

Leptospirosis is an infection of the kidneys and liver caused by the bacteria Leptospira interrogans. People usually catch this from coming in contact with contaminated water or soil infected with animal urine. The bacteria may enter through the eyes, mouth, nose, or broken skin.

Of all the animals carrying and transmitting this infection, possums, rodents, raccoons, and swine are among the most common.

Tularemia is an infection that can be passed on from animals such as rodents to humans, and it’s caused by the bacteria Francisella tularensis. People usually catch this from coming in close contact with sick, infected, or dead animals. The bacteria can also enter through breaks in the skin, by consuming contaminated food and water, or by inhaling the bacteria.

Tularemia in humans usually manifests as fever, chills, headaches, muscle aches, skin ulcers, and swollen lymph nodes. In severe cases, it can lead to pneumonia and even death.

The most common way people catch these infections is from the bite of an infected tick or contact with an infected animal’s blood or tissues. The bacteria usually enter through the bite wound or broken skin.

Symptoms of spotted fever in humans usually involve a sudden onset of fever, chills, headaches, muscle and joint aches, and a rash. In severe cases, it can lead to pneumonia, meningitis, kidney failure, and even death.

The Chagas disease is an inflammatory disease that comes from the parasite Trypanosoma cruzi. This is initially transmitted to humans and animals through the triatomine bug, best known as the “kissing bug.” When these insects bite or infect a possum, that’s the time the possum becomes a carrier of the parasite. Then, after that, they transmit it to humans through their feces.

The Chagas disease in humans appears as fever, fatigue, body aches, headaches, rash, and swollen lymph nodes. This can lead to heart failure and even death.

The coccidian protozoa serve as the responsible parasite for coccidiosis. This disease is spread from one tiny animal to another when they come in contact with infected feces or ingest an infected animal’s tissue.

Humans get infected through contact with contaminated water or soil or by consuming contaminated food. The parasites usually enter through the mouth, nose, or eyes.

Coccidiosis in humans manifests as diarrhea, nausea, vomiting, stomach pain, and weight loss. It can lead to dehydration, malnutrition, and even death in severe cases.

Toxoplasmosis is an infection that comes from the single-celled parasite, Toxoplasma gondii. This is transmitted to humans and animals the same way as others, through ingestion and contact with contaminated foods and water.

The parasites usually enter through the mouth, nose, or eyes. Another instance that humans get toxoplasmosis is through undercooked contaminated meat such as lamb, pork, or venison and shellfish like oysters, clams, or mussels.

Toxoplasmosis usually manifests as a mild flu-like illness but can lead to brain damage and even death.

The last from our list is Trichomoniasis. This disease generally originates from cattle during breeding. Opossums harbor this by feeding on the infected cattle’s flesh. The condition can also be passed on from one opossum to another through close contact.

Trichomoniasis is actually categorized as a sexually transmitted disease in humans. This appears as a burning sensation when urinating, itching around the genitals, and a discharge from the penis or vagina. In severe cases, it can lead to pelvic inflammatory disease (PID) in women and infertility in men.

What other diseases can opossums possess?

There are still a lot out there. Opossums carry diseases, parasites, and bacteria such as:

Opossums are nearly impervious to rabies. Cases of rabies in opossums are very, very rare. The reason for this is that the opossum’s body temperature is too low for the rabies virus to survive. The opossum may exhibit strange behavior if it is sick with another disease, but it is not rabies.

Prevention of Disease from Opossums

The best way to prevent diseases from opossums is to avoid contact with them. The virus or bacteria can enter your body quickly, and it’s impossible to stop it even if you wash afterward. Always wear gloves and wash your hands thoroughly afterward if you must handle them. Do not handle waste cleaning with your bare hands too!

Other ways to prevent harboring these diseases be:

Need Help With Opossum On Your Property?

There’s no safer and more accessible solution than our professional service. AAAC Wildlife Removal’s skilled experts specialize in removing opossums and other wildlife animals. With years of experience in the industry, we guarantee the safety of your home and family.

If you encounter opossum attacks and other unwelcome wild animals on your property, don’t hesitate to reach out! We’ll be happy to rid your yard of pesky opossums.

Opossums may be cute and harmless-looking, but they can infect humans with several diseases that can be fatal. This includes leptospirosis, tularemia, spotted fever, Chagas disease, and coccidiosis. While some of these diseases can be treated, others can be unexpectedly deadly.
It’s important to be aware of these diseases and take precautions to avoid contact with possums whenever possible. Doing so can help protect yourself and your family from becoming sick. Contact us if opossums are making your property their home. We will safely and humanely remove them for you.