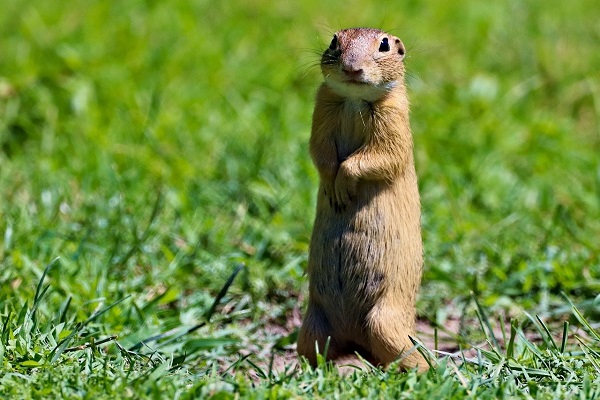 Each animal in the ecosystem reproduces uniquely. Some mate for life, and some may only mate once or twice a year. Their mating style may differ too. Some are polygamous, some are monogamous, and others are cooperative breeders.

For all animals, this serves as the most vital part of their life cycle. It helps to ensure the survival of a species by replenishing the population with new individuals.

The pocket gopher is no different! These small, burrowing mammals are known for their voracious appetites and ability to reproduce quickly. They breed once or twice a year, with a mating period lasting about two months. After a successful one, how many offspring do gophers have?

How many pups do gophers usually have?

Gophers usually have two to six pups per litter. However, the number of offspring can differ depending on various factors, such as the gopher species, age, and parents’ health. For example, older female gophers tend to have fewer pups than younger ones. The amazing thing, though, is that gophers reproduce rapidly.

They can have two litters a year, with each litter spaced about three to five months apart. This only means that a female gopher can produce up to 12 offspring yearly!

The mating season of the pocket gopher happens during springtime, around March to May. During this time, both male and female gophers undergo a thorough search for partners. And after a successful selection and reproduction, the females undergo gestation for about three weeks. Then, they give birth to altricial baby gophers, completely naked and undeveloped.

Gophers are exciting creatures when it comes to their mating habits. Gophers are polygamous, which means they have no permanent partners. They can mate with a different partner year after year. It’s not just every season, too. These animals can even mate multiple times in a 2-month-long period.

These wild mammals are solitary, but the mating season calls them to search for a suitable mate. After the deed, the male and female will go their separate ways. The mother gopher will raise her pups independently until they are physically mature and independent.

During the breeding season, male gophers become aggressive like the entire male species of the wild. They engage in fights that may result to harm and even death. The victor will then have the privilege to mate with as many females as possible.

On the other hand, female gophers are more particular with their choice of mates. They would usually pick the biggest and strongest male gopher they could find to father their pups. This is because these characteristics increase the chances of survival for their offspring.

How long is the gophers’ gestation period?

A female gopher’s gestation period is about 21 to 28 days. Mother gophers will take care of herself and her pups during this time by preparing a special nesting area. She will also bring food stored in cheek pouches or pockets and put it inside the burrow to provision for her offspring.

When the pups are finally born, they are helpless and weigh only about an ounce each. Their eyes are still shut tight, and they cannot hear or see. This condition is called altricial. Opposite to other mammals delivered as “precocial,” born well-developed and able to feed themselves almost immediately.

How long do baby gophers stay in their habitat?

Baby gophers stay in the gopher burrow for about two to three months. They will only come out to feed and play once they are old enough. After weaning, the pups will start eating solid food and are ready to venture outside the nest independently.

The young gophers then leave their mother’s den to establish their territories. Males will travel further than females, which is typical in the animal kingdom. When they find a good spot, they will start digging their burrows and live there for the rest of their lives. There, they live for an average of 3 years, although they last up to 5 years in captivity.

How long do gophers live?

Gophers have a relatively short lifespan. In the wild, they only live up to three years. But in captivity, gophers can live up to five years old. Their lifespan is greatly affected by their natural predators and the kind of environment they live in.

The main predators of gophers are weasels, snakes, owls, coyotes, and bobcats. Domestic cats and dogs hunt these animals as well. In some parts of the world, humans also trap and kill gophers for their fur or to get rid of them because they damage crops.

In addition, gophers reach sexual maturity at 1 year old. This means that they only have two years to reproduce and multiply. And, because they can produce 2 litters a year with 12 babies in the estimate, they may have 24 offspring in 2 years. However, this will still greatly vary since the average number of pups they produce is 2-6.

More About The Gopher Species

There are about 35 different species of gophers in the world. They are also classified into different genera: Geomys, Orthogeomys, and Pappogeomys. In the genera, their specific gopher’s species belong. Here below are some species under their genera:

Pocket gophers can disrupt properties when their gopher tunnels reach your lawns or grounds. They may dismantle your crops or gardens by eating the roots of your plants and bulbs. They may also eat your flowers and whatever plant is deemed edible. These rodents can also intersect your irrigation systems, resulting in damage.

When this happens, they’re for sure not a pleasure to keep. But, dealing with them can be difficult. So, calling us AAAC Wildlife Removal will ease your gopher problem. We’ll be there in no time and eliminate all your gopher worries!

The process of mating is essential for the survival of any species. It allows for new individuals to be born and helps to keep populations stable. Pocket gophers are animals with a relatively high number of offspring. A female gopher can have anywhere from 2 to 6 pups per litter, and she can have 2 litters every year. So, a single female gopher could have up to 24 offspring in just two years!

When these animals give birth, their babies stay in their built tunnel systems for 2 to 3 months. There, the mother nurses the pups until they slowly become physically mature and independent.

These animals are interesting and of benefit to the wild. That’s undeniable. But, when they invade homes and destroy vegetation, it could annoy homeowners. If something like this happens, call us at AAAC Wildlife Removal and we will eliminate the problem, giving you peace of mind.

What month do gophers have babies?

Pocket gophers have their babies in springtime. This falls in the months of March-May.

How old are Gophers when they have babies?

A pocket gopher can only reach sexual maturity at age one. They can mate for about two years since their lifespan usually lasts three years.