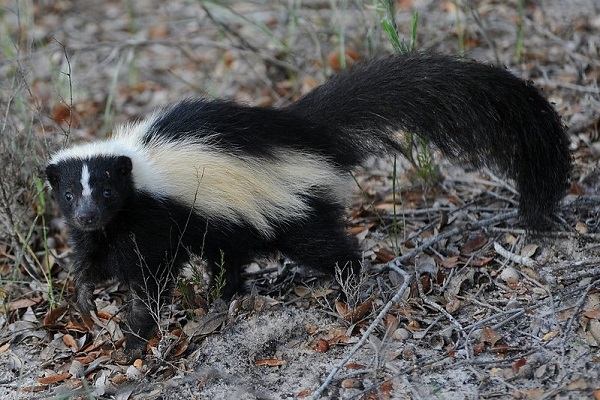 There are many diseases that spread from animals to humans. These are called Zoonotic diseases and are caused by microorganisms transmitted by direct contact with the animal or its bodily fluids or by vectors such as fleas, bites, etc.

It is common knowledge for humans that interaction with wild animals accompanies health risks, although this is not very common, it does happen. These health risks range in severity, from a runny nose to an infection that needs hospitalization. But what about skunks? Can you get sick from skunk spray?

The main active ingredient in the skunk spray is called thiols. This sulfur-based compound is also found in garlic, onions, and other foul-smelling foods.

Aside from being extremely smelly, thiols are also irritants. When they come into contact with the mucous membranes of your nose, eyes, or mouth, they can cause burning and watering. If you’re lucky enough to only get a whiff of skunk spray, you’ll probably just experience some temporary discomfort.

But if you’re unfortunate  enough to get a direct hit, you may experience more serious symptoms like:

If you experience any of these symptoms, it’s important to seek medical attention immediately.

What Should You Do If You Get Sprayed?

A skunk spray is unbearably smelly. If you get sprayed by a skunk, the first thing you should do is to keep calm. It might be difficult since the smell is so bad, but try not to panic. If you start to panic, you’ll only make the situation worse.

After that, you should know that decontamination is important. It not only removes the oily liquid but also breaks it down, so you don’t smell completely foul anymore. So, to remove the skunk smell, you may follow this recipe:

It’s a common myth that applying tomatoes or tomato juice will work. But it’s not true. In fact, it will only hide the stink. So, the skunk odor will return if the tomato juice continuously breaks down.

Things To Look Out For to Avoid Getting Sprayed

Skunks only use their spray as their last resort. They do this when they feel their life is threatened and they have no other choice. To avoid getting sprayed, it’s best to know the signs that a skunk is about to spray.

The first sign is when the skunk starts stomping its feet. It will also arch its back and raise its tail. If you see these signs, it’s best to back away slowly. Do not make sudden movements, as it might trigger the skunk to spray.

A skunk spray can reach up to 15 feet. Skunks can also control their direction, so don’t think about running.

How Can I Minimize The Possibility of Getting Sprayed?

Keeping your distance is the best way to avoid getting sprayed by a skunk. If you see a skunk, do not approach it. And if you have pets, keep them indoors as much as possible. Skunks are also attracted to pet food, so keeping your pet’s food inside the house is best.

You should also secure your trash cans. Skunks will rummage through trash cans in search of food. If you have a compost bin, make sure it has a tight-fitting lid.

And lastly, if you see a skunk on your property, try to scare it away. Make loud noises or

shine a light at it. Trying a repellent with a scent based on its predator can be effective. Just make sure you do not hurt or harm it in the process. Just enough to warn them that you don’t want them on your property.

Diseases and infections from skunks and wild animals, in general, can be acquired in several ways. It could be from a skunk bite, coming in contact with the animal’s saliva or feces, or even just being sprayed. Ingesting contaminated food or water can also put you at risk.

The most common diseases that humans can acquire from skunks are:

Rabies is a serious neurological illness that is caused by a virus. This disease can be transmitted to humans through the saliva of an infected animal, usually through a bite. The rabies virus attacks the central nervous system, which can eventually lead to death.

Signs and symptoms of rabies in humans include fever, headache, nausea, vomiting, excessive salivation or drooling, weakness, and paralysis. It’s important to seek medical help immediately if you think you’ve been exposed to rabies.

Leptospirosis is a bacterial infection that can be transmitted to humans through the urine of an infected skunk or another animal. This disease can cause fever, headache, nausea, vomiting, muscle pain, and red eyes. In more severe cases, it can lead to kidney failure or meningitis.

Canine distemper is a virus that primarily affects dogs but can also be transmitted to humans. This disease is characterized by fever, runny nose, and watery eyes. It can also lead to vomiting, diarrhea, and seizures. In severe cases, canine distemper can be fatal.

Skunks with canine distemper exhibit the same signs and symptoms as dogs, like fever, runny nose, and watery eyes. However, skunks with this virus might also have hardening of the footpads and nose.

Canine hepatitis is a viral disease characterized by fever, vomiting, diarrhea, abdominal pain, and jaundice. In severe cases, it can lead to liver failure or death. The common ways this disease is acquired is through consuming feces, saliva, nose discharge, or urine from infected skunks.

Roundworm parasites are commonly found in the intestines of dogs, cats, and other animals like our very own skunks. These worms can be transmitted to humans through contact with contaminated soil or feces. Symptoms in humans include abdominal pain, diarrhea, and fever.

Signs of a Rabid Skunk

When you notice a skunk acting strangely than its normal behavior, there’s always a possibility that the skunk might have rabies. But how would you know for sure?

Oftentimes, skunks infected with rabies act aggressively and attack people or animals for no reason. However, not all of them will exhibit this impulsive behavior. Some may act timid and just shy. You will also notice abnormal drooling.

If you or your pet got bitten by a skunk, wash the wound immediately with soap and water. You should also see a doctor immediately, especially if you haven’t had a rabies vaccine. As for your pets, make sure to bring them to the vet as soon as possible for proper evaluation and treatment.

Need Help With Skunk Infestation On Your Property?

It’s reasonable to be afraid of contact with wild animals, including skunks. But sometimes, you can’t just avoid them, especially if they decide to make your property their home.

If you have a skunk infestation problem on your hands and don’t know what to do, contact a wildlife control company like us at AAAC Wildlife Removal. We will help you get rid of skunks in the most safe and effective way possible.

All contact with wild animals is unsafe, although disease transmission does not occur that often it still happens. Skunks are not exempt from this rule. In response to threats, skunks release a foul-smelling spray. This is their way of protecting themselves from predators.

The best way to avoid getting sick from a skunk is to keep your distance and never try to approach or touch them, even if they look cute and cuddly. If you have skunks on your property, contact a professional Wildlife control company like AAAC Wildlife Removal.

Are skunks omnivorous and solitary animals?

Skunks are considered omnivorous animals because they eat both plants and animals. Their diet consists of small mammals, insects, fruits, and vegetables. Also, skunks are solitary. This means they live alone and only come together during breeding.

What is the color of the skunks?

The skunks are black-and-white. Their fur is mostly black, with a white stripe running down the center of their backs.

What countries are skunks found in?

The skunk family is abundant in North and South America, Europe, and Asia. But, the ones in Asia do not exist outside their continent. The skunks there are called stink badgers, which exist only in Malaysia, the Philippines, Sumatra, Java, and Indonesia.