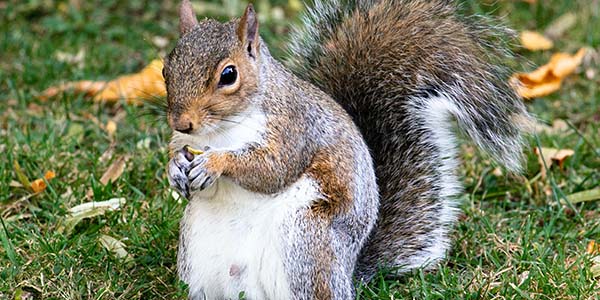 Most people know that squirrels are small. However, it turns out there is a whole class of squirrels that are much bigger than the average variety! There are some really big squirrels in nature, and if you thought that the ones in your backyard were big, just wait until you see these guys.

There are big squirrel species in many places around the world in locations like North America, Europe, and parts of Asia. The largest in these regions are known as marmots which belong to a family called Sciuridae within the order Rodentia.

Marmots live in underground tunnels that they dig themselves or take over from other animals such as woodchucks (groundhogs). The biggest of the big marmots is known as the alpine marmot and lives in places like Alaska, Europe (Austria, Italy, Switzerland) Asia (Mongolia, Russia).

Many people are unaware that there are even bigger ones out there. For instance, did you know that giant flying squirrels are the biggest of them all? The world’s largest flying squirrels are known by their genus Petaurista and most of them live in Asia. These guys look like regular grey ones in your backyard but way bigger and have huge furry wings that help them glide between trees.

In many ways, big squirrels have an advantage over small ones. For one, they can store more reserves in their body for leaner times during winter. This is important because food can be hard to come by in cold climates.

Being bigger also means you are less likely to be prey for other animals. Since squirrels are food for many other animals, this is a pretty big deal! Furthermore, it means that you can fend off any predators who do try to eat you. This also means that a big animal can hunt more prey, and therefore has more options for sustenance.

How Did They Get So Big?

The size of animals is usually determined by the environment (habitat) they live in and their diet. It can also be influenced by other factors such as temperature, oxygen levels, lack of natural predators, etc.

The largest squirrel species today are found on islands where there is plenty of food for them to eat and fewer or no predators because it’s an isolated area. For example, Giant Flying Squirrels and Indian Giant Squirrels both live on mountains covered with tropical forests which have a lot of available resources like fruits, nuts, insects so that helps these animals grow bigger than those living elsewhere.

Squirrels are usually divided between Ground (Marmotini), Tree (Sciurini), and Flying (Pteromyini) squirrels. They all have their biggest members and these are usually the ones that live in cold climates high up in the mountains.

Let’s take a look at these large squirrel family members.

Eastern fox squirrels (Sciurus niger), also known as the stump-eared squirrel is the largest of tree squirrel species native to America’s Northern regions. The overall length of an eastern fox squirrel can start from 50 to 76 cm (20 to 30 in) and a weight of around 1.1 pounds to 2.2 pounds depending on the subspecies.

Then there is the Black Giant Squirrel (Ratufa bicolor) who can grow up to a meter long and weigh almost 3 pounds! These huge creatures live in the tropical rainforests of Southeast Asia.

The largest ground squirrel is the Arctic ground squirrel (Urocitellus parryii). They have an average length of 14 to 18 inches and a weight of up to 2 pounds. These creatures live in the arctic tundra across North America and Eurasia and the males are typically larger than females.

There’s also the Columbian ground squirrel (Urocitellus columbianus), the second largest of the ground squirrel genus Urocitellus. They have an average length between 13-16 inches in overall length and weight between 0.7 to 1.7 lbs.

However, the term ground squirrels typically refer to medium-sized ground squirrels like the ones mentioned above, if you’re really going for big ones then the Marmots (Sciuridae>Marmota) are the biggest! Their largest member is the Olympic marmot (Marmota Olympus). They can reach a length of almost 76 cm (30 in!) and weigh 3 to 11 kg (6.0 to 24.3 pounds!).

Flying squirrels have a whole genus of giant squirrels (Petaurista). The one considered largest is the Red and white giant flying squirrel (Petaurista alborufus) who can grow up to 60 cm (23 in!) long and weigh as much as 10 pounds!

Then there is this rare species of flying squirrel known as Laotian giant flying squirrel (Biswamoyopterus laoensis) which wildlife conservation biologists found in a bushmeat market in Laos. They have a body length of 45 cm (18 inches) and weight around 1.8 kg (4 pounds!) It lives at elevations above 1500 meters where its habitat includes evergreen forests with a warm climate year-round.

Biggest Squirrel in the World

The black giant squirrel (Ratufa bicolour) is referred to as the largest species of squirrel with an average overall length of 50 to 76 cm (20 to 30 in). Almost two or three times the size of an eastern grey squirrel. They’re found on the islands of Borneo and Sumatra in Southeast Asia where their natural habitat includes rainforests.

This animal belongs to Sciuridae family, and is also known as the Giant Malayan squirrel. They get their name from two different regions which are Ratufa and Bicolor, ratufa means “hairy one” in Sanskrit while bicolour comes from the Latin word bi- (two) + color (colour).

They used to be widespread throughout Southeast Asia before human habitat encroachment but now only limited areas remain for them which makes them an endangered species.

A close second is the Indian giant squirrel (Ratufa indica) which is the same family as the black giant squirrels. Their overall length can also reach up to 50 cm (20 in!) and weigh around 3.3 to 4.4 pounds! (1.5 to 2 kg). These are mostly found throughout the tropical forests of South Asia where they live mainly on treetops.

You also might be wondering about the largest squirrel ever found on earth – The Paenemarmota is the largest known (albeit extinct) ground squirrel species. It is estimated to have weighed around 35 pounds or 16 kg, almost twice the size of the largest marmots currently alive.

They lived in North America between three to ten million years ago during the Blancan to late Hemphillian period. They were most likely herbivores and ate plants, nuts, and insects as their teeth suggest.

Bigger body size can indeed lead to an improved ability to survive cold winters, but it does come at a cost. For one thing, you require more food to stay alive than smaller animals do. This is because bigger bodies have higher energy requirements per pound than small ones.

Since squirrels eat nuts and seeds mostly (and not meat), they need a lot of these foods every day in order to survive. This is why the big ones are usually found in the northern reaches of North America and Eurasia with plenty of trees to provide their favorite foods – seeds, nuts, bark, and buds.

Another disadvantage of being large is that you are more likely to be seen by animals who want to eat you! Since bigger animals stand out so much, it means they can’t hide as well. If your body size was small enough, it would be easier for you to find places where predators aren’t looking and sneak away undetected.

However, the most important disadvantage of being large is the way it affects your reproductive success. The period between birth and sexual maturity for big animals is much longer than for small animals, and this means that it takes a long time to have offspring. In addition, the gestation period for big animals is usually much longer, and the number of offspring per litter tends to be lower.

As you can see, squirrels aren’t all small. Although most of them are, there are some that grow to impressive sizes thanks to their natural habitats which allow them to thrive and survive for millions of years without any major issues.

Size in animals is an adaptation to their surroundings and their food source. The biggest species of these creatures typically live in isolated areas like islands where there’s plenty of grub for them to eat and few animals of prey.

Being big does have its advantages especially in squirrels who live in cold areas where they can stay warm throughout the winter, but it also brings disadvantages like needing more food to survive as well as reduced reproductive success.