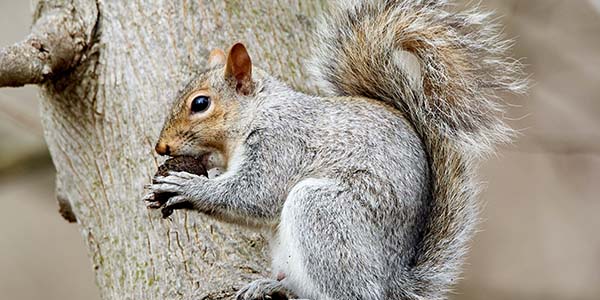 Squirrels are rodents that have adapted quite well in urban areas. Their inquisitive nature and ability to find food in a variety of environments make them quite resilient. And compared to other rodents, squirrels have a pretty good life expectancy. The life span of a squirrel is typically between about two and four years, but this can vary depending on a few different factors. This article will explore a squirrel’s lifespan and the factors that determine how long they will live.

The average lifespan for a squirrel is about two years, but it varies from species to species and depends on the habitat that they live in. Living either in the wild or in captivity has a large impact on the lifespan of a squirrel. In captivity, some squirrels have been known to live as long as 16 years with proper care. In their habitats, however, it is typical for squirrels to live between two and three years.

Squirrel’s Lifespan in the Wild

Squirrels have a pretty good life span in nature assuming they live past their second year. The first two years of a squirrel’s life are the most vulnerable and most do not make it to their second birthday.

The biggest factor in determining the lifespan of a squirrel is due to predators such as hawks, foxes, bobcats, and humans. If they are able to avoid being eaten in their first 2 years, then their chances of dying are significantly decreased.

In general, however, most young squirrels are killed or eaten before reaching full adulthood themselves. Those who do not fall prey to larger mammals typically perish from among other things like disease and harsh weather conditions.

Lifespan of a Captive Squirrel

Squirrels that live out their lives in captivity tend to have much longer life expectancies than those living free in their natural habitat. One reason for this is because these animals no longer face any predators and typically receive better food and shelter compared to what they would get in the wild.

In addition to this, captive squirrels will have medical care if they become ill which further increases the duration of their life. Captive squirrels can typically expect to live as long as 16 years or even more depending on how well they are cared for and what type of squirrel it is.

Factors That Affect a Squirrel’s Lifespan

There are several factors that can affect the longevity of a squirrel. Habitat is one of the most important factors that play a role in determining how long they can live. Living in an urban environment, such as someone’s backyard, is far different than living out on the grasslands where there are many predators and limited resources to find food.

The natural habitat of various types of squirrels will determine their average lifespan. For example, red squirrels typically only live about one year because they die from starvation or predation before reaching adulthood.

Another factor that affects the lifespan of a squirrel is its species – some squirrels live longer than others. Eastern Grey Squirrels, for example, typically live between three and four years while Fox Squirrels live between four and six years.

The climate in the area where it lives also plays a role in determining how long a squirrel will live. Squirrels that live in colder climates have shorter lifespans because they cannot store as much fat as those living in warmer climates, which makes them more susceptible to predators and less likely to reach adulthood.

The level of predation that a squirrel faces is also a factor. Squirrels though are quite lucky in this regard because they are gifted with keen eyesight, amazing reflexes, quick speed, and the ability to climb with ease. These traits make them quite adept at avoiding predators.

Squirrels can also contract diseases that may shorten their lifespan. For example, Squirrel pox can cause scabs on the body and damage to the nervous system which will typically lead to paralysis, seizures, and death. In other cases, though squirrels may contract a disease that is not deadly but limits their lifespan because it leads them down an unhealthy path. For example, there are diseases that hinder locomotion preventing the animal from scavenging food.

Finally, people have also been known to either help or hinder the survival of squirrels depending on their own goals and intentions. While many people enjoy having them around, others are less than thrilled by their presence (especially when they cause property damage).

Deforestation can greatly reduce the amount of habitat available, which makes it more difficult for squirrels to find shelter or access food sources necessary for survival.

The amount of human interaction with a squirrel can also impact its lifespan. Wildlife that is fed by people or lives in an area where they are regularly protected from predation will have longer lifespans than ones that do not receive this type of protection.

Lifespan between different squirrels differs based on a variety of factors such as habitat, disease resistance, and food availability among other things. For example, red squirrels have a much shorter lifespan than gray ones because they live in an area where animals of prey are more prevalent given their limited distribution across North America.

In addition to this, diseases that affect red squirrels tend to take hold earlier compared with those affecting gray squirrels which further reduces their lifespan due to making them easier prey for larger creatures like foxes and hawks who hunt sick animals specifically.

Here are the life expectancies of common squirrels:

Red squirrels have relatively long lives despite their small size. The average longevity of a red squirrel is 5 years although they can live as long as 10 years in the wild. Captive squirrels can live to 8 years or more. Their young have an extremely high mortality rate – 75% die before their first year.

The average lifespan of an eastern gray squirrel is 12.5 years in the wild and 20 years in captivity. Females typically live longer than males which is common among most mammals due to the better medical care they receive (males are more likely to be hunters). The oldest recorded eastern grays lived to 24 yrs old.

Western grays in the wild have an average lifespan of 7-8 years and 18 years when they are captive.

Like red squirrels, most of their young die before they reach two years of age. In the wild, their lifespan is about 8 -18 years. Captive ones also live up to 18 yrs old.

Flying squirrels have a short life expectancy compared to their cousins on the ground. The average lifespan of a flying squirrel in the wild is about 3 – 5 years and 10 years in captivity.

Black squirrels have an average life span of 6 years in the wild and 18 years in captivity.

Squirrel Lifespan Compared to Other Rodents

Squirrels are one of the longest-lived rodents in the world, just next to capybaras. Many people believe that they reproduce at an alarming rate but this too isn’t true since most only produce two litter per year with each litter having four pups.

In general, tree squirrels typically live longer than ground squirrels. Ground squirrels are more vulnerable to predators compared with their tree-dwelling cousins so they tend to have a much lower lifespan.

Ground squirrels living in natural habitats typically only live three to five years but those that are kept as pets can sometimes live up to 10 years if properly cared for. This is significantly higher than what most people would expect given how dangerous it is for these creatures out on their own where they must constantly keep an eye out for danger from other animals and humans alike.

Tree squirrels typically live long lives if they are not killed early in their life or lose their habitat. In their natural habitats, most tree squirrels make it up to ten years but those living in captivity can often survive for as much as 20 yrs!

Female squirrels typically live longer than males, although this might be a common trend among mammals due to males being more likely to be involved in riskier activities that expose them to predators and the elements. Females also tend to stick together with other females which provides them with better protection from the dangers out there.

Red squirrels though appear to be an exception to this as their males often live longer than their female counterparts.

Squirrels are fascinating creatures! Their life expectancies are quite varied and dependent on many different factors. Their lifespan differs between species, sexes, habitats, and geographic locations. They have one of the longest lifespans among the rodent family.