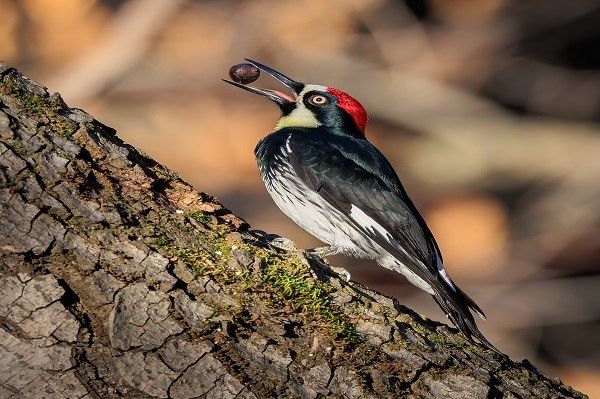 Woodpeckers would typically have a black and white feather pattern. The colors help them blend in the forest, making it difficult for predators to spot them. The plumage of both male and female woodpeckers is usually the same. However, some species have distinct plumage between genders, with the males having more colorful feathers than the females.

There is an immense variety in the Woodpecker family. These birds vary in size and plumage and come in a wide range of colors, but there are some similarities between species.

Excluding vagrant species, 23 woodpecker species are native to the United States. Although they vary in form and habit, most of these birds are widespread and can be found relatively easily.

Red-bellied woodpeckers are one of the most common woodpeckers in the eastern United States. As their name suggests, they have a redhead and breasts with a white belly. The back is black with white bars, while the wings have large white patches. Males and females look alike, but juveniles lack red plumage.

These medium-sized woodpeckers are about 9 inches long with a wingspan of 13 inches. They are fairly easy to spot and can often be seen in parks and backyards, making them one of the most common backyard birds.

Red-bellied woodpeckers eat mostly insects, including beetles, ants, bees, and wasps. However, they will also eat fruit, nuts, and seeds.

Another kind of woodpecker famous for its sweet tooth is the sap-sucker bird. Instead of sucking saps, as the name tells, these creatures usually sip and drink the oozy sticky stuff using the hair-like structures on the tips of their tongues.

Of all sapsuckers, the yellow-bellied is most widespread. They nest in cool evergreen forests across Canada and the Northeastern states and spend winter in Mexico and Central America. When the time where migration starts, it passes through all areas east of the Rockies.

When you spot a large, brownish woodpecker with black barring on the back and black spots on the belly, you might have come across a Northern Flicker. This kind of woodpecker will be effortlessly recognized in flight by its bright white rump. Also, we can identify them by their large black crescent-shaped mark on their breasts.

The  Pileated Woodpecker is one of the biggest woodpeckers in North America, second only to the Ivory-billed Woodpecker. It is a striking bird with a black body, white stripes down the side of its face, and a large red crest. Males also have a red mustache stripe. These woodpeckers are about 16 to 19 inches long with a wingspan of 27 to 29 inches.

Pileated woodpeckers are found in forests throughout North America. They prefer mature forests with large trees, but they can also be found in young forests and urban areas. Pileated woodpeckers eat mostly insects, including ants,  beetles, and wood-boring insects. They also eat fruits, nuts, and seeds.

Downy woodpeckers are the smallest woodpeckers in North America. They are about 6 to 7 inches long with a wingspan of 9 to 10 inches. These birds have black and white plumage with black tails. Males have a red patch on the back of their heads, while females have a white patch.

Downy woodpeckers are found in forests throughout North America. They prefer mature forests with large trees, but they can also be found in young forests and urban areas. Downy woodpeckers eat mostly insects, including ants, bees, beetles, and caterpillars. They also eat fruits, nuts, and seeds.

Last but not the least kind of woodpecker is the Ivory-billed woodpecker. The mass devastation of its forest habitat caused a severe population decrease in the 1800s, and only very small numbers survived into the twentieth century.

These creatures are hailed as the “Lord God Bird”  because people who saw it would exclaim, “Lord God, what a bird!”. The last confirmed sighting of an Ivory-billed Woodpecker was in 1944, and the bird was declared extinct in the 1950s. However, there have been a few unconfirmed sightings since then.

The Ivory-billed Woodpecker is about 20 inches long with a wingspan of 30 to 31 inches. It is mostly black with white stripes on the wings and a white bill. The male has a red crest, while the female has a black crest. These birds were found in forests in the southeastern United States.

Problem With Woodpeckers Drumming In Your Property? Call Us Now!

Woodpeckers are both valuable and disturbing to humans. They are useful in removing insect pests from trees but become detrimental when they feed on fruit crops or make holes in wooden structures. If woodpeckers get comfortable on your property, Getting rid of these creatures would be very hard.

When it comes to these encounters, call us at AAAC Wildlife Removal and we’ll remove them for you!

It’s undeniable that woodpeckers really are impressive creatures at first glance. They have powerful wood-pecking habits, protected eyes, sticky saliva, and well-built sharp beaks that make the intense drilling possible. There is a variety of their species too, found almost anywhere in the world.

Next time you see one of these creatures, take a good look and appreciate its uniqueness! But if you have problems with woodpeckers on your property, remember that AAAC Wildlife Removal is just a call away.