Coyotes (or American jackals and prairie wolves) are one of the many famous wild canines of North America. They are bigger than foxes, smaller than wolves and resemble many domesticated dogs.

They have had to make do with human encroachment by adapting to many environments such as grasslands, arid deserts and suburban environments. Unfortunately, this also means that they can pose a danger to humans and pets when they get too close to human-inhabited areas. 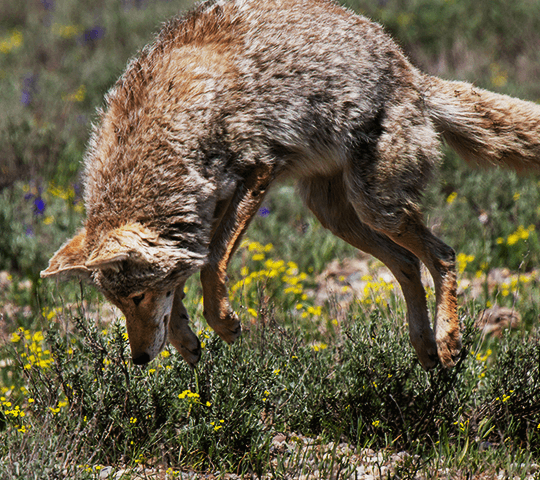 Coyotes look a little like German shepherds, though their fur color is mostly short, light gray and red with sprinkles of black and white, which they shed once a year. This can vary from one region to the next. Their snouts are narrower and tails, bushier. They weigh from 15 to 44 pounds and are between 3 feet 3 inches and 4 feet 5 inches in length. Coyotes are smaller than the gray wolf, with longer ears and a slimmer frame.

The coyote is a canine species that includes 19 known subspecies. There are 16 of them in Canada, US and Mexico, with the three others in Central America. They mate in February and March and give birth in April and May, with average litters of 5 to 7 pups. Other adults in a pack may help with hunting and caring for the pups. The young are weaned after about six weeks but will stay with the parents until late summer. If you hear strange barking or yipping sounds on your property, you may have some coyote pups on your hands.

They’re technically omnivorous, though about 90% of their diet usually consists of meat. They eat a variety of animals and will both hunt and scavenge for food. They will eat cats, dogs and farm animals if given easy access or if they have little other choice.

Coyotes can sprint at around 43 miles an hour and jump a distance of about 13 feet. Their eyesight, hearing and sense of smell are excellent.

Coyotes move around and hunt in packs of 6 to 8 (including their young). They are most active during the night and in the early morning hours. They will seek shelter to bed and may use dens when rearing pups. Coyotes can often find their way into crawlspaces, underneath porches and patios and even into basements. They’ve also been known to find shelter under decks, sheds and outbuildings. Any structure that is elevated off the ground can serve as a perfect location for coyotes to raise a family.

Because of the coyote’s wide range and diet, it has been known to carry a very large variety of diseases. They are vectors for diseases such as rabies, distemper and mange that are communicable to both humans and pets. Make sure that your pets are properly vaccinated to ensure both your and their wellbeing.

Coyotes may pose a threat to pets, chickens, sheep and other livestock. There is a widespread fear that they may attack humans. Though they are rare, it is still wise to be prudent.

Attacks on humans primarily occur when females are raising their pups or when coyotes experience food shortages in the winter. 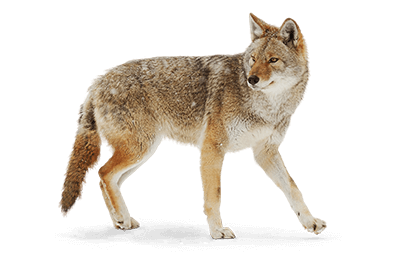 Coyotes threatening your pets? We can help! Select your state below to find a qualified AAAC Wildlife Removal Pro near you!

Coyote got you nervous?
We can help!