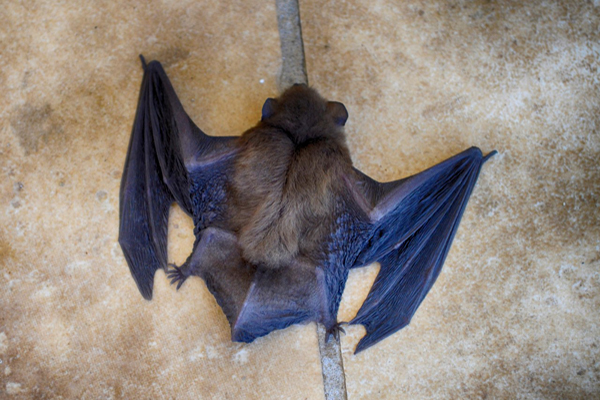 Bats aren’t the first creatures that come to mind when you think of charming, cuddly animals. However, despite their frequently negative reputation, bats are among the most fascinating creatures in the world.

And there are well over 1,400 known varieties of bats. So, if you’re looking to learn more about these misunderstood mammals, you’ve certainly got your work cut out for you!

But don’t worry, we’ve done a bit of the heavy lifting for you. In this article, we’ll introduce you to some of the most common types of bats found around the world.

How Bats Are Classified

Chiroptera is the scientific term for all bat species, broken down into two suborders: Megabats and microbats.

As their name suggests, megabats are the larger of the two groups. These creatures typically have good eyesight, muscular legs for climbing, and long claws on their digits that enable them to grasp fruit. Megabats eat a diet consisting mainly of fruits, flowers, and leaves.

Meanwhile, microbats are much smaller than their megabat cousins. They use echolocation to navigate and hunt in the dark, and typically eat insects. Microbats make up the vast majority of known bat species with over 1,200 different varieties.

A suborder of the Chiroptera that includes taxa previously known as megabats Pteropodidae:

Pteropodidae is also known as fruit bats and Old World fruit bats. With 191 species, they are the only members of the Pteropodoidea superfamily.

A superfamily of bats that contains five families:

A suborder of the Chiroptera contains what we typically think of when we picture bats – small, mouse-eared creatures that mostly eat insects. There are about 540 different species of these microbats throughout the world.

While there are over 1,400 different species of bats, some types are much more common than others. You’re likely to encounter these varieties of bats more often.

A small, brown or gray bat with long nose, the lesser long-nosed bat is found in the southwestern U.S., Mexico, and Central America, this species feeds on nectar and pollen from agave and cacti flowers. Thanks to its long tongue (up to 4 inches!), it’s able to reach deep into  the flowers to lap up the nectar.

This bat plays a vital role in the pollination of these plants. Lesser long nosed bats travels what’s known as the “nectar trail” from Mexico to the southwestern U.S., following the blooming of various flowers to ensure a consistent food supply.

During the day, they roost in caves or other sheltered areas. At night, they emerge to forage for food.

Hoary bats are one of the largest types of bats in North America. They’re easily recognizable by their rusty-brown or gray fur, which is interspersed with white hairs – hence the “hoary” name. These bats are found across Canada, the U.S., and Mexico.

Hoary bats primarily eat moths, but they will also feast on other insects, like beetles and wasps. They’re able to eat up to half their body weight in a single night! During the day, they roost in trees. At night, they emerge to forage for food.

Hoary bats have a wide distribution , but they’re not particularly common. In fact, they’re considered a species of “least concern” by the IUCN.

Pallid bats  are found in the southwestern U.S., Mexico, and Central America. They get their name from their pale fur, which can range in color from creamy white to tan. Pallid bats are relatively large, with a wingspan of up to 16 inches.

Pallid bats primarily eat insects, like beetles and grasshoppers. One of its favorite foods, the Arizona bark scorpion,  is also one of the most venomous scorpions in North America! Pallid bats are immune to the scorpion’s venom, however, so they can eat them, no problem.

During the day, pallid bats roost in caves or other sheltered areas. At night, they emerge to forage for food.

Little brown bats typically eat insects, like moths and beetles and can consume up to 1,000 insects in a single night! The bat has smaller eyes and a less developed sense of smell than other types of bats, so it relies primarily on echolocation to find food. During the day, little brown bats roost in trees, caves, or attics, in small groups of 10-20 bats. At night, they emerge to forage for food.

These bats have helped farmers immensely by eating large numbers of crop pests, like moths. Unfortunately, little brown bats are currently facing a population decline due to a fungal disease called white-nose syndrome.

Mexican free tailed bats are found in the southwestern U.S., Mexico, Central America, and South America. They’re one of the most common types of bats in North America, with a population in the millions.

Mexican free tailed bats primarily eat insects, like beetles and moths. They’re able to eat up to half their body weight in a single night! These bats are known for their impressive migratory patterns. Each year, they migrate  from Mexico to the southwestern U.S. to give birth and raise their young.

The Mexican free tailed bats at the Congress Avenue bridge in Austin, Texas have become a popular tourist attraction. Every night, from March to November, these bats emerge from under the bridge in search of food. It’s estimated that up to 1.5 million bats live in this colony!

These bats typically eat insects, like moths and beetles. They use echolocation to find food, as well as their keen sense of smell. Virginia big eared bats roost in trees during the day and emerge at night to forage for food.

The Virginia big eared bat is currently facing a population decline due to habitat loss and white-nose syndrome. However, their populations have stabilized in recent years and their numbers are slowly starting to rebound.

The California leaf-nosed bat is in Southern California, Southern Nevada, and portions of Arizona. It derives its name from the leaf-like look on the tip of its snout, an adaption used by bats to transmit echolocation sounds through their noses, identified by its enormous ears, prominent nose, and grey to dark brown fur.

The bat’s natural habitat are arid and semi-arid regions including deserts, washes, and lowland mountain slopes. It roosts in trees, caves, old mines and culverts during the day and forages for food at night. The California leaf-nosed bat primarily eats moths, though it will also eat other insects like beetles.

Unlike most insect eating bats, who captures insects in flight, these bats are “gleaners” meaning  they capture insects by  skimming them off the ground while in flight. The California leaf-nosed bat is currently listed as a “least concern” species by the IUCN.

The Mariana fruit bat, also known as the flying fox, is a species of bat found on the Mariana Islands in the western Pacific Ocean. These bats are large, with a wingspan of up to 3 feet. They’re black or dark brown, with lighter fur on their undersides.

The Indiana bat is a species of bat found in the eastern and midwestern United States. It’s a small bat, with a wingspan of 9-10 inches. It’s color is brown or gray, with lighter fur on its undersides.

Indiana bats like to form  large colonies, often roosting in caves or old mines. These bats typically eat insects, like moths and beetles. They use echolocation to find food, as well as their keen sense of smell. Indiana bats are listed as a “endagered” species by the US Fish and Wildlife Service.

Their populations have declined due to habitat loss and white-nose syndrome, a devastating disease that has killed millions of bats in North America.

The desert long-eared bat is a small bat found in the southwestern United States, specifically in Arizona, Colorado, New Mexico, Oklahoma, and Texas. This bat has reddish-brown fur and large ears that are almost as long as its body.

The desert long-eared bat is nocturnal, meaning it is active at night. It roosts or rests in trees, shrubs, and cliffs during the day. The desert long ear bat feeds on insects such as  moths, beetles, and ants and uses echolocation to find food and navigate in the dark.

The Greater horseshoe bat is one of the most significant bats in Europe, with a wingspan of up to 12 inches. It is dark brown or black, and its fur is dense and silky. This bat has a horseshoe-shaped noseleaf, used to direct sound waves for echolocation. This bat has a very long life span for its size, living up to 41 years in captivity.

The greater horseshoe bat is found in woodlands, fields, and hedgerows in Europe. It roosts in trees, caves, and old buildings during the day and forages for food at night. This bat primarily eats insects, such as beetles, moths, and flies.

Like most bats, they are nocturnal , meaning they are active at night. The striped yellow-eared bat roosts in trees during the day and forages for food at night. This bat feeds on insects, such as moths, beetles, and ants and uses echolocation to find food and navigate in the dark.

Problem With Bats? Call Us!

If you need help with bats on your property, AAAC Wildlife Removal is the best company to call. We’ll remove the animal safely and quickly , and make sure they don’t come back. We’re experts in bat removal and control, and we’re here to help! Give us a call today.

Bats are amazing creatures that come in all shapes and sizes, each with its own unique features. While some bats can be beneficial to humans, others can be a nuisance. From the world’s smallest bat to the world’s largest bat, there is a bat out there for everyone! So, take a moment  to learn about these incredible animals and the next time you see one, you’ll be sure to appreciate it.