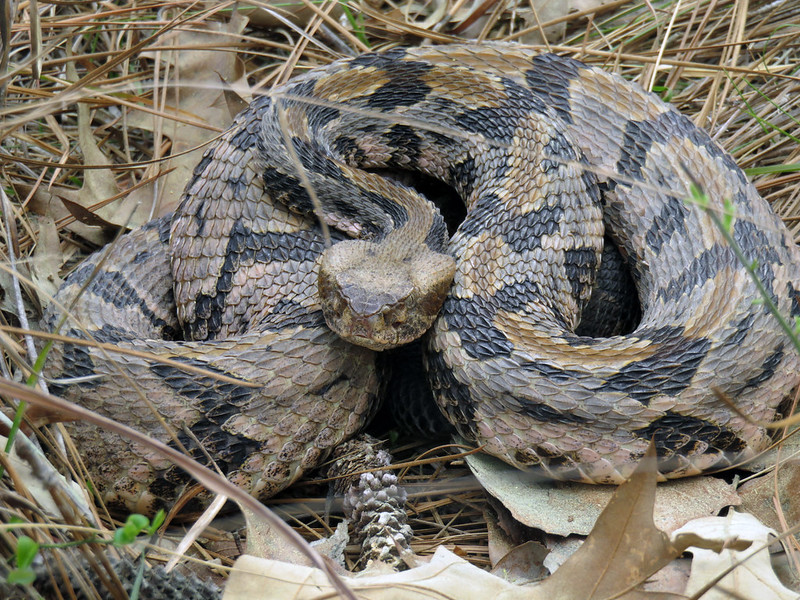 The rattles on a rattlesnake are its most distinguishing feature. When threatened, the snake will shake its tail, causing the rattles to emit a loud buzzing noise. This warning serves to scare off potential predators and warn them of the snake’s venomous bite.

At a glance, these rattles seem like segmented beads that are loosely attached to the snake’s tail, and it looks like there is quite a bit of them. So, how many rattles does a typical rattlesnake have? We’ll take a look at these fascinating snake adaptations and find out.

What Exactly Is In A Rattlesnake Rattle?

A rattlesnake’s rattle is actually made up of a series of keratinous segments that are loosely attached to the snake’s tail. These segments are filled with air pockets, and as the snake vibrates its tail, the air pockets create the characteristic buzzing sound.

The rattles on a rattlesnake are actually modified scales. These scales are called annuli and they cover the entirety of the snake’s body. The annuli towards the end of the tail are larger and more pronounced than those near the head.

So, How Many Rattles Does A Rattlesnake Have?

A rattlesnake would typically have between eight and thirteen segments in its rattle. Rattlesnakes will continue to add new segments throughout their lives, but the rate at which they do so varies. A snake sheds its skin two to four times a year when it’s young, and as it gets older the number of sheds per year decreases.

There is a belief that you can determine a rattlesnake’s age by counting the number of segments in its rattle. However, this method is not always accurate as there are many factors that can affect the rate at which new segments are added. For example, some segments can fall off even though the snake didn’t shed its skin.

It can give you a very rough estimate at best but if you want to know the exact age of a rattlesnake, the best way is by looking at the size and coloration of the snake. Adult snakes are usually larger than juveniles, and their colors tend to be darker and more muted.

How Do Rattlesnakes Make their Rattle Sounds?

Rattlesnakes are known to be strong and silent predators. But when they’re threatened, they will shake their tail, the segments of their rattle will rub against each other, and this causes the rattles to emit a loud buzzing noise.

This sound is created by the snake’s rattle segments rubbing against each other. The sound is pronounced because the rattle is empty inside and the segments are filled with air pockets. When the snake vibrates its tail, the air pockets create a buzzing noise.

What Happens When a Rattlesnake Rattles?

When a rattlesnake is threatened, it will shake its tail and the segments of its rattle will rub against each other. This produces a loud buzzing noise that warns potential predators. The sound is produced by special muscles that vibrate the snake’s tail. The segments of the rattle are designed in a way that amplifies the sound.

Rattlesnakes need to be careful when they’re using their rattle. If they use it too much, the segments can break off and be lost.

What is the Purpose of a Rattlesnake’s Rattle?

The purpose of a rattlesnake’s rattle is to warn potential predators of the snake’s venomous bite. The sound produced by the rattle is meant to scare off predators and warn them of the danger.

Rattling sounds protects the reptile from larger predators who might not see rattlesnakes in the sea of dry leaves on the forest floor.

As soon as they’re born, baby rattlesnakes have a button, or nubbin, at the end of their tail. This button is actually the beginning of their rattle. However, baby or juvenile rattlesnakes can’t make the same loud buzzing noise as their adult counterparts, as there is only one segment in their rattle.

As the rattlesnake sheds its skin, it will add new segments to its rattle. It also takes the juvenile snakes some time to learn to control their muscles in order to produce the rattling sound.

How Dangerous are Rattlesnakes?

Rattlesnakes are one of the most dangerous snakes in the world. Rattlesnake bites inject some of the most potent venoms of any snake. A single bite can kill a human within hours if left untreated.

This is why it’s important that people who hike in areas where rattlesnakes live, be aware of their surroundings and take precautions. Wearing long pants and high boots is a good way to protect yourself from a snake bite.

What You Should Do if You Encounter a Rattlesnake?

The most common rattlesnake in North America is the Timber Rattlesnake, and they are usually found in the eastern United States. Timber rattlesnakes are the ones you’ll most likely encounter if you’re hiking in the woods. These snakes like the prairie rattlesnake are pit vipers, which means they have heat-sensing pits on their faces that help them to locate prey.

If you’re hiking in an area where there are rattlesnakes, be sure to stay on the trail and avoid tall grass or leafy areas where snakes might hide. If you do encounter a snake, give it a wide berth and don’t try to capture it. The best thing to do is just leave it alone and let it go on its way.

It’s important to stay calm and avoid making sudden movements. Snakes will usually only strike if they feel threatened. If you do need to move, make sure to do so slowly and carefully.

If you are bitten by a rattlesnake, seek medical attention immediately. Rattlesnake venom is very dangerous and can be deadly if not treated promptly.

What to do if you got bit?

If you’re in the middle of hiking and you get bitten by a rattlesnake, there’s not much you can do. The best thing to do is to remain calm and call for help. If help is being sent, don’t try to walk out of the area. This will only spread the venom through your body faster.

The best thing you can do is to wait for medical help to arrive and hope that the anti-venom works. Rattlesnake bites are very serious and can be deadly, so it’s important to get treatment as soon as possible.

If you need rattlesnakes or other venomous snakes removed from your property, it’s best to call a professional. Attempting to remove them yourself is very dangerous and should only be done by someone with experience.

AAAC Wildlife Removal is a professional wildlife removal company that specializes in the removal of rattlesnakes. We have years of experience and knowledge in dealing with these dangerous creatures.

We understand the dangers that rattlesnakes pose to both humans and animals, which is why we take every precaution to ensure our technicians are safe when removing them from your property.

If you encounter a rattlesnake, the best thing to do is to give it a wide berth and avoid making any sudden movements. If you need a rattlesnake removed from your property, it’s best to call a professional.