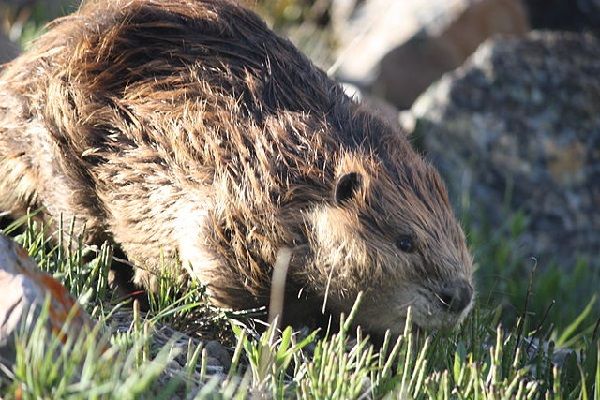 Beavers are the largest rodents in North America, while they have the title of the second-largest in South America. Beavers are large and semi-aquatic. They belong to the genus Castor and are native to the Northern Hemisphere.

Currently, there are only two species of beavers remaining. They’re the North American Beaver (Castor canadensis) and the Eurasian beaver (Castor fiber). This is after the bear-sized Giant Beavers species fell into extinction.

Which is the biggest beaver ever recorded?

The biggest beaver ever recorded was found in North America and weighed 110 pounds. This beaver is twice as large as the average beaver size! It was caught in Iron County in 1921 but was originally from Wisconsin, United States.

The beaver has a large, flat tail and webbed hind feet. Their front feet are sharp and dexterous and appear similar to a kitten’s. Beavers use their tails for balance when standing on their hind legs.

How long is the longest beaver record?

Did you also know that there is a slight difference between a giant beaver and a modern beaver? It was found that modern beavers have a proportionally smaller brain size, while the giant beavers’ were bigger!

The giant beavers only got to live during the Ice Age. Records and fossils were found on Indian Island, Toronto, Ontario, and other parts of Canada. Fossils also appear in the Crow region.

How big can a beaver get?

Beavers can grow to be very large creatures! They don’t stop their growth process. The average beaver weighs about 35 pounds and is approximately 3-4 feet long.

This will depend on the species, though. The North American beaver can measure 23 to 39 inches, about 60 to 100 centimeters. This is their body alone. When you measure their tail, it adds another 8 to 12 inches.

On the other hand, the Eurasian beaver can measure as long as 29 to 53 inches or 73 to 135 centimeters long.

What is the average size and height of a beaver?

The average size of adult beavers would depend on the species. The North American beaver can weigh between 11 and 32 kg or 25 to 70 pounds. Meanwhile, the Eurasian beaver can weigh 18 to 55 kg or 40 to 120 pounds. When it comes to height, both are usually around 1 to 1.5 feet tall.

Beavers love to eat bark, twigs, leaves, and the cambium layer of tree trunks. However, their favorites are aspen and willow trees. When they eat these, it helps them maintain their sharp teeth. Otherwise, their teeth will grow too long, which might become a problem when they try to eat food.

What is the size of a beaver’s tail?

An adult beaver’s tail is usually between 8 and 12 inches or 20 to 30 centimeters long. Their tails are broad, flat, and scaly.

Beavers use their tails for balance when standing on their hind legs. But, the most notable role of their feet is to help them swim faster. They also use this as an alarm by slapping it against the water.

How Big Do Male Beavers Get?

Male beavers are usually larger than their female counterparts. When it comes to height, males are generally around 1 to 1.5 feet tall. The average male beaver weighs between 16 and 32 kg or 35 to 70 pounds.

Male beavers also have larger front teeth than females. This is one of the ways you can tell them apart. Together with female beavers, they create dams and lodges using their large teeth.

What is the size of a female beaver?

Female beavers are usually smaller than their male counterparts. When it comes to height, females are generally around 0.8 to 1.4 feet tall. At the same time, the average female beaver weighs between 11 and 27 kg or 25 to 60 pounds.

Female beavers love to build beaver dams near streams and rivers. They also like to live in areas where there are a lot of trees. These provide them with the necessary resources to build their homes and dams.

What size are Beaver Kits?

Beaver kits are the babies of beavers. They’re born blind, deaf, and toothless. They’re born with a thin layer of fur that keeps them warm and dry. A beaver kit weighs about 0.5 pounds or 220 grams at birth.

Kits grow quickly and can weigh up to 4 pounds or 1.8 kilograms after just two months. At six months, they’re already the size of an adult beaver.

Beaver kits stay with their parents for the first two years of their lives. After that, they go off and build their own homes.

Did you know… that beavers can stay underwater for 15 minutes? Yes, you read it right! Beavers can hold their breath for that long.

Did you know… that beavers are the only animals with the nature to modify their home? Beavers are known for their dam-building activities. But did you know that they don’t build dams out of spite? They do it for two reasons: to protect themselves from predators and to provide a home for their offspring.

Their dedication to picking up twigs and branches results in the installation of a beaver dam site or beaver lodge. It’s usually situated in a river, pond, or creek. During this time, they might also take this opportunity to eat. They peel off, cut, drag small parts of branches, and gnaw on them to keep their incisors sharp.

The beaver family has a pair of castor sacs and castor glands. When beavers want to mark their territory, they leave their scent on things like trees and rocks. But they don’t use urine like other animals. Instead, they secrete a substance called castoreum (produced by castor sacs).

Need Help With Beaver Problem on Your Property?

If you have beavers on your property, you need to call AAAC Wildlife Removal. Do not attempt to remove them yourself, as this could be dangerous.

AAAC Wildlife Removal can determine the best course of action to take. We will also have the necessary equipment to safely and humanely remove the beavers from your property.

There are only two remaining species of beaver. They are the North American and Eurasian beavers. The biggest beaver, being 110 pounds, was already a huge shocker. But, knowing that they continue even puts them in an interesting spot. We might not know there’s already a beaver out there that’s bound to replace the title of the beaver found in 1921 in Wisconsin.

Beavers remain to be exciting creatures because of their dam-building habits. It’s something that they do to protect themselves from predators and also to provide a home for their offspring. So, if you ever see beavers carrying twigs in their hands, they’re probably building their dam site!

When do beavers mate?

Reproduction season can occur in different months depending on their regions. Beavers in the northern hemisphere generally mate between January and March, then birth their young in spring. While those in the southern hemisphere breed between late November and December.

What are the natural predators of beavers?

The natural predators of beavers are coyotes, wolves, bears, alligators, and eagles.

Where do beavers live?

The environment in which beavers live is also where they build their dam sites. They live in streams, marshes, ponds, lakes, and creeks.