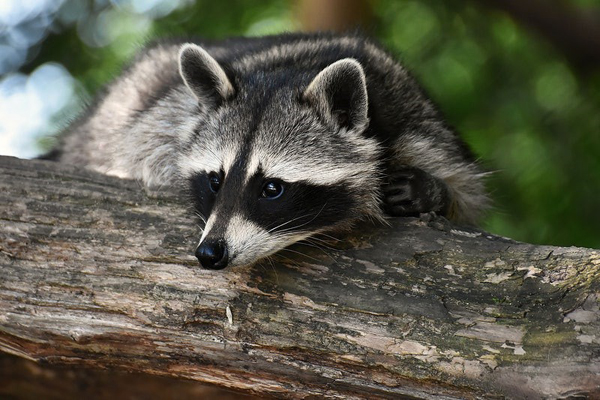 Raccoons (procyon lotor) are some of the most interesting creatures in North America. Though they’re often considered mischievous pests, as they’re known for getting into garbage cans, eating pet food, and spreading diseases like rabies, there’s a lot more to these nocturnal animals than meets the eye.

Raccoons “See” With Their Hands

Raccoons are often seen “washing” their food in water before they eat it. This behavior is because raccoons have very dexterous front paws, which they use to feel around and explore their surroundings. Their paws are way more sensitive than human hands and can pick up on things that we would never notice.

When raccoons are doing their “washing” routine, they are actually feeling the texture and temperature of objects and things in their environment and trying to determine if those are safe to eat or not. Raccoons also have 5 fingers on each paw, which gives them a very human-like grip. This gives them the ability to open jars, doors, and even latches.

The Raccoon’s Mask Is an Anti-Glare Device!

The raccoon’s black mask isn’t just for show – it serves an important purpose. These masks help to reduce the glare from the sun and also act as a sort of anti-glare device when raccoons are out at night.

Raccoons are nocturnal creatures, so their eyes are very sensitive to light. The mask helps to protect their eyes from the bright lights of the day and the darkness of night.

A Raccoon Once Lived in the White House

A raccoon once made its home in the White House during Calvin Coolidge’s presidency. The female raccoon named “Rebecca” was supposed to be served for Thanksgiving dinner, but she was spared because Coolidge didn’t have an appetite for raccoons as he hadn’t eaten one before.

Raccoons Are Quite Smart

Raccoons are actually quite intelligent. They have been known to remember complex tasks and they are similar to dogs and primates in intelligence. Studies by Vanderbilt University have shown that raccoons have 438 million neurons in their cerebral cortex. This is a significant number, especially when compared to other animals of a similar size, and is just slightly below monkeys.

Raccoons Were Almost Used as Lab Rats Instead Of Rats!

Before rats had been commonly used in laboratory experiments, another animal was being considered for the role: the raccoon. Raccoons were thought to be good candidates for lab experiments. However, they were difficult to maintain compared to the smaller rats, and they also had a tendency to escape and hide in the vents.

In the end, the rats were chosen over the raccoons as they were easier to handle and less likely to escape. However, the raccoons still hold a place in history as one of the animals that were considered for this important role.

A Comic Book About A Raccoon Caused Japan’s Raccoon Problems

A wildly popular comic book in Japan featured a raccoon character named Rascal. The comic book led to the importation of raccoons into Japan, as people wanted to have their own pet raccoon like the one in the book.

Today, these pet raccoons have become a destructive, invasive species in Japan. As they have no natural predators, they are wreaking havoc by rummaging through garbage cans and causing damage.

There Are No Raccoons in Alaska!

Besides Hawaii, Alaska is the only state in the US that doesn’t have any raccoons. Raccoons live in all 48 of the contiguous states, but they are not able to survive in the cold temperatures of Alaska.

It’s thought that this is because they are not very particular about the food found in the wild there. So, they are not able to fatten up enough to make it through the long winters. Raccoons were introduced to Alaska in the late 1930s by a raccoon fur farmer, but they didn’t seem to take to the state’s conditions and haven’t been seen since.

Raccoons Are Related to Bears

Raccoons have often been thought to be related to dogs, cats, and weasels. However, with molecular analysis, it has been shown that they are actually most closely related to bears.

This finding is surprising to many, as raccoons and bears are very different animals. However, the two groups share a common ancestor, and over time they have evolved to become the animals we know today.

Raccoon Dogs Are Not Related to Raccoons

Raccoon dogs are often thought to be related to raccoons, due to their similar names and appearance. However, these two animals are not actually related.

Raccoon dogs are a type of canid, which means they are related to dogs, wolves, and foxes. Raccoons, on the other hand, are members of the Procyonidae family, which includes other animals such as ringtail cats and olingos. So, while the resemblance is there, raccoon dogs and raccoons are far from being family.

Raccoons Can Run Up To 15 Miles Per Hour

Raccoons don’t seem like they would be fast runners, with their short legs, bulky bodies, and laid-back demeanor. However, these animals can actually run quite fast when they need to.

When it comes to mating, male and female raccoons have different strategies. Males, who are usually solitary creatures, will mate with multiple females. Females, on the other hand, will usually mate with just one male.

The reason for this difference is that it is beneficial for male raccoons to mate with as many females as possible. This ensures that they will be able to father more offspring. For females, it is more beneficial to mate with a single partner, as this will help to ensure the survival of their young.

There’s Only One Endangered Raccoon Species

There are many different species of raccoon, and most of them are doing quite well. In fact, there is only one species that is currently endangered.

The pygmy raccoon is found on the island of Cozumel, off the coast of Mexico. This species is critically endangered due to species introduced by humans, such as dogs, cats, and boa constrictors, which prey on them. They are also threatened by habitat loss, as their forest homes are being destroyed for tourism and development.

Raccoons Will Eat Anything!

Raccoons are omnivorous animals, which means they will eat just about anything. Omnivores are animals that eat both plants and other animals.

In the wild, raccoons will eat things like fruits, nuts, berries, fish, insects, frogs, and small mammals. They are also known to eat garbage, pet food, and other human food. Basically, if it looks like it might be edible, a raccoon will give it a try!

Raccoons may seem like simple wildlife, but they are actually quite fascinating creatures. From their unique hands to their useful tails, their surprising speed and strength, to their curious demeanor, there is a lot to learn about these creatures.

So, next time you see a raccoon, take a moment to appreciate all that these mammals are, and all that they have to offer. Who knows, you may just find them to be as interesting as we do!