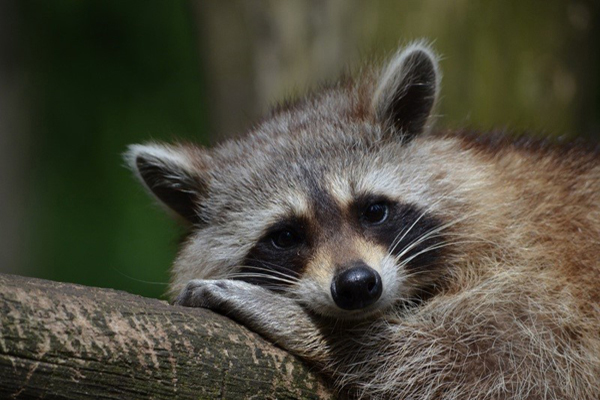 Raccoons are one of the most common animals in North America. They are found in almost every state and can be seen in both rural and urban areas. They are so common that many people do not give them a second thought. But have you ever wondered where these creatures came from?

Where Did Raccoons Come From?

The procyonid family, to which raccoons belong, first originated in Europe about 25 million years ago. Over the millennia, these early raccoons slowly made their way across the Bering land bridge into Central or South America. From there, ancestors of the common raccoon spread to North America where they began to evolve into the creatures we know today.

The genetic diversity among raccoons found in North America today is thought to be the result of this long and complicated history.

Some procyonids like the crab-eating raccoon (Procyon cancrivorus) stayed on the tropical side of the continent while others moved further north into temperate regions.

Where Did The Name “Raccoon” Come From?

The word raccoon has its origins in the Algonquin word arukhkun, meaning “he who rubs, scrubs and scratches with his hands.” This is a reference to the animal’s habit of washing its food before eating it.

The English word raccoon was first recorded in 1706, and it was originally spelled raccon. The spelling was later changed to racoon, and it has been spelled this way ever since. The word raccoon is thought to be derived from the Powhatan word aroughcun, which is also thought to be of Algonquin origin.

The word procyon from procyon lotor, raccoon’s scientific name, comes from the Greek words pro, meaning “before,” and kyon, meaning “dog.” This is a reference to the fact that raccoons were once thought to be members of the dog family. The word lotor comes from the Latin word for “washer,” which is a reference to the animal’s habit of washing its food.

The word “coon” the abbreviated colloquialism for “raccoon” didn’t come about until the early 1800s when it was made a nickname for the Whig Party in the United States. It has since then been used as a derogatory term for persons of African descent.

Raccoon Taxonomy: What Family Do Raccoons Belong To?

The scientific name for the raccoon is Procyon lotor, and it belongs to the family Procyonidae. This family also includes other animals such as the ringtail, kinkajou, and olingo.

Procyonids are a diverse group of animals, ranging in size from the tiny olingo, which weighs less than a pound, to the kinkajou, which can weigh up to 10 pounds. They are found in North and South America, as well as parts of Asia. Procyonids are most closely related to the bear family, Ursidae.

Evolution And Natural History: How Did Raccoons Evolve?

From their ringtail and cacomistle ancestors, p. lotor has evolved into the animals we know today. They can stand on their hind legs, have become excellent climbers, and their front paws have evolved to be very nimble and dexterous.

The earliest procyonid ancestor fossils date back to about 25 million years ago in the late Oligocene and early Miocene epochs. They crossed over to Central America from Europe via the Bering land bridge, which was a strip of land that connected Siberia to Alaska during the ice age.

As the climate began to warm and the ice age came to an end, the Bering land bridge melted and disappeared. This cut off the migration route for animals and isolating populations on both sides of the bridge.

From Central America, some procyonids eventually made their way to South America where they diversified into new species such as kinkajous, olingos, ringtails, and of course raccoons. It is believed that the kinkajous and olingos diverged from the other procyonids about 22.6 million years ago while the ringtails and raccoons parted ways 17.7 million years ago.

Procyonids first appeared in North America in the late Miocene after the great American interchange. This event was a period of time when land animals could migrate between North and South America.

The first modern raccoon fossils date back to the Pliocene epoch, about 3 million years ago. By the Pleistocene epoch, which began 2.6 million years ago, there were four different types of raccoons living in North America. However, only two of these species, the common or Northern raccoon and the giant raccoon survived into the present day.

The giant raccoon was much larger than its modern counterpart, weighing up to 50 pounds. It is thought to have gone extinct due to competition with common raccoons as well as humans. The common raccoon is the only species of raccoon that is still found in North America today.

These raccoons have been hunted for their meat and fur by native Americans and early settlers since they first arrived on the continent. Raccoon hide and pelt were used to make sporrans and coonskin caps. In the 18th century, raccoon hunting became a popular sport among European colonists.

Coonskins have also been used as a means of payment in the 19th century. In the early 20th century, the raccoon fur industry began to decline due to a decrease in demand as well as conservation efforts.

It’s also around this time when they were introduced to Europe where they quickly became established and are now considered to be invasive species that are damaging to the local ecosystem.

Today, wild raccoons can be found throughout North America, as well as in parts of Central and South America. They have also been introduced to Europe, Asia, and Africa in the mid-20th century where they are mostly considered an invasive alien species.

Raccoons are very adaptable animals and can live in a variety of habitats, from mountain ranges, forests, and swamps to urban areas. Their range expansion is just remarkable in the sense that they have been able to conquer so much territory and live in such a wide range of environments.

One of the reasons that raccoons are so successful is their diet. Raccoons are omnivorous, meaning that they eat both plants and animals. Raccoons will eat just about anything, including insects, rodents, frogs, birds, eggs, aquatic foods, fruits, and vegetables.

These are the extinct Barbados raccoon, the extant Tres Marias, Guadeloupe, Bahamas, and the Cozumel island raccoon.

However, in the 3rd edition, 4 has been downgraded to subspecies status when their morphological and genetic structure differences were found to be insignificant. Only the fifth island raccoon population, the Cozumel raccoons (procyon pygmaeus), was considered to be a full-fledged species.

The Cozumel raccoon, also known as a pygmy raccoon or dwarf raccoon, is the smallest species of raccoon. They are found only on the island of Cozumel off the coast of Mexico. This subspecies is critically endangered due to habitat loss and destruction as well as hunting pressure.

An adult raccoon varies considerably in size, with males being larger than females. They can range in body weight from 10 to 30 pounds, and their bodies can be anywhere from 24 to 38 inches long. The raccoon’s tail has dark rings and is usually about 12 to 20 inches long.

Mating season for raccoons begins in late winter, and females usually have their first litter of 2 to 5 cubs in the spring. Litters of 6 or more are not uncommon. Young raccoons reach sexual maturity at around one year old. Cubs are born blind and deaf, and their mother will take care of them until they are old enough to fend for themselves, which is usually around 6 to 7 months old.

Raccoon lifespan in the wild is typically 2 to 3 years, but captive raccoons have been known to live for up to 20 years. Native range sizes for adult raccoons vary depending on the habitat and food availability, but they typically have home ranges of 1 square mile to 3 square miles.

In recent years, the North American raccoon has become increasingly common in urban areas. This is likely due to a combination of factors, including the availability of food supply and shelter in these areas and the lack of natural predators.

Raccoons are very well-suited to living in urban areas. The North American raccoon population densities have exploded in recent years, with about 50 to 150 of them per square kilometer in some areas.

One of the reasons that raccoons are so successful in urban areas is their diet. Raccoons are omnivorous, meaning that they eat both plants and animals. This gives them a lot of options when it comes to finding solid food. In addition to garbage, a raccoon’s diet will also include dirty food, pet food, fruits, and vegetables from gardens.

People feeding wild animals, such as birds and squirrels, often unintentionally attract raccoons as well. Once a raccoon has found a food source, it will keep coming back for more.

The availability of shelter also plays a role. Urban raccoons sleeping in attics, trees, and even storm drains are quite a common sight. A local raccoon population will often take up residence in attics, garages, and sheds to rear young raccoons. They will also build dens in trees, hollow logs, and abandoned buildings.

The lack of larger predators also contributes to the success of urban raccoons. In the wild, a raccoon’s main predators are coyotes, foxes, owls, and bobcats. However, these predators are not often found in urban areas. This lack of predation pressure allows the raccoon population to flourish.

Additionally, their lack of fear of humans also makes it easy for them to live in close proximity to people. Pet raccoons are not uncommon in states where they are legal to own and are often treated like any other family pet. As pets raccoons typically live for about 5 to 10 years.

For all of these reasons, it is no surprise that the effective population size of raccoons has increased dramatically in recent years.

The raccoon’s reputation as a nuisance animal is well-deserved. Regular contact to humans has made them become seemingly unafraid of us. They are adept at opening trash cans, raiding gardens, and getting into attics and other enclosed spaces. This behavior often leads to conflict with humans.

Rabies in raccoons is also a concern, as they are one of the many animals that can carry and transmit diseases to humans. Rabid raccoons will often exhibit strange behavior, such as being active during the day or acting aggressively.

Infections of Baylisascaris procyonis roundworm is also a serious health concern. This parasite is found in the raccoon’s intestine and its eggs are passed in the raccoon’s feces. If these eggs are ingested by humans, they can cause severe neurological damage.

Wildlife management strategies are often needed to control raccoon populations in urban areas. The US Fish and Wildlife Service offers many tips on how to deal with raccoons and other nuisance animals.

Despite their reputation, raccoons can be fascinating animals. They are intelligent, resourceful, and adaptable creatures that have managed to thrive in both the wild and in urban areas.

Raccoons have gone a long way since their days as small, tree-dwelling creatures. Today, they are found all over the world and have even adapted to regular contact with humans. While they may be nuisance wildlife to some, there is no denying that raccoons are fascinating animals. These creatures with dark masks and ringed tails have proven to be very adaptable and successful wherever they go.

Is a raccoon dog a dog or a raccoon?

Raccoon dogs are not dogs, but they are members of the canid family, which includes dogs, wolves, and foxes. Raccoon dogs are native to Asia and Eastern Europe. They look like raccoons because of the black mask around their eyes and their bushy tails.