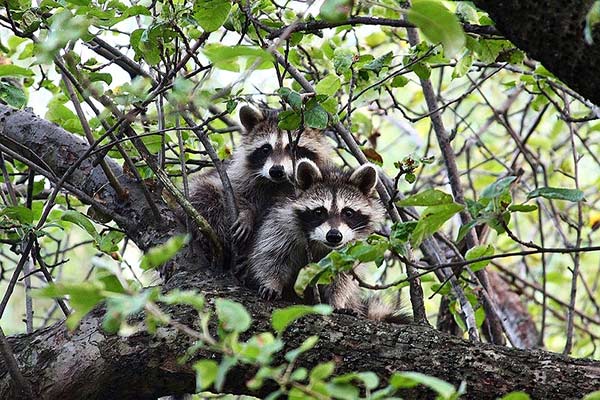 While raccoons are not considered to be a threatened or endangered species, they do have predators that prey on them. Lets take a look at the wide variety of critters that think of raccoons as a tasty snack!

Being a small animal in the wild is difficult since many natural predators nearby are more robust, faster, and fiercer. Although this is part of the natural order of things, some creatures, like adult raccoons or juvenile males, nevertheless face challenges in surviving due to their small size. Given their short average life span, they serve as a food source for common predators.

Here are some of the major predators or animal predators that prey on raccoons:

One of the most common wild predators of other raccoons is large cats. In North America, this includes mountain lions, pumas, and bobcats. These powerful predators hunt alone and use their stealth and speed to take down their prey.

Mountain lions can be found from sea level to heights of 10,000 feet in both coastal forests and deserts. Their natural habitat is in rock crevices, steep valleys, or mountains in areas where there are deer. In Golden, Colorado, reports of raccoon carcasses in yards have surfaced. According to authorities, mountain lions are to blame for killing raccoons.

Bobcats are common in North America. They are habitat generalists and can mostly live in woodlands, coastal swamps, deserts, and scrubland. Bobcats have sharp teeth that they use when they encounter raccoons in the wild. They’ll also eat a smaller raccoon if the opportunity arises.

Like eagles, birds of prey or raptors have a massive wingspan extending up to 8 feet. They have huge, powerful talons to kill their game before eating and powerful beaks that can crush their prey. Their vision is also very keen, allowing them to spot potential meals from far away. Some of the raptors that hunt and eat raccoons include:

They can be found in much of the Americas. A great horned owl has a wingspan of up to 5 feet and can weigh up to 4 pounds. Their diet consists mainly of small mammals, including rabbits, skunks, and raccoons.

The golden eagle is a ubiquitous bird in North America, Europe, and Asia. They have a wingspan of about 7.5 feet and can weigh up to 15 pounds. Their diet consists of rabbits, squirrels, marmots, ground-nesting birds, mice, lizards, and snakes.

A North American species of an eagle with a wingspan of up to 8.2 feet and weight of up to 15 pounds are slightly smaller than golden eagles. Their diet consists mainly of fish, but they will also eat small mammals, such as rabbits, squirrels, and raccoons.

Do you ever wonder how raccoons and alligators come into contact with one another?

Raccoons and alligators coexist from North Carolina to Texas. Alligators can only be found close to water sources, which also happen to be raccoons’ preferred same habitats. So eating raccoons and other animals nearby will be easy.

These mammals are drawn to water for various reasons, including the ability to swim and their famous habit of “washing their food”. Due to their love of water and frequent habitation of areas near lakes and streams, raccoons are also drawn to swimming pools. Raccoons wash their front paws and food before ingestion.

Coyote packs are found across North America in habitats ranging from deserts to forests to urban areas. They are adaptable animals and eat almost anything, including rodents, rabbits, deer, snakes, lizards, and fruits and vegetables.

The two wild animals will encounter each other most commonly near humans in rural and suburban areas. Raccoons and coyotes, unlike other animals, have successfully adapted to the expansion of humankind encroaching on their habitats.

When wolves hunt in packs, they often seek larger prey. So if they come across a raccoon, they will probably pass it by because it won’t be enough for the pack to eat. However, if a wolf hunts alone, it will not hesitate to consume a raccoon, particularly juvenile raccoons.

Pythons and Anacondas eat mammals, such as raccoon meat, rodents, deer, and pigs. However, they have been known to consume raccoons on occasion.

On the other hand, raccoons and some small snakes don’t typically interact in some areas unless one tries to startle the other.

Fisher Cats are found in North America, specifically in the northeastern United States and southeastern Canada. They are mainly members of the weasel family and have long slim bodies and hind feet that allow them to pursue their prey in small spaces. Fisher cats weigh up to 20 pounds and eat various animals, including squirrels, mice, rabbits, birds, and reptiles.

Fisher cats and raccoons are almost similar in size and appearance, so they are often mistaken for one another. However, fisher cats are more slender than common raccoons and have pointed faces, while raccoons have rounder faces with black “masks” around their eyes and dark fur.

Typically, fishers prey on creatures that are smaller than themselves. Although it’s doubtful that fisher cats intentionally pursue raccoons, they might take advantage of an opportunity if they’re starving or come upon babies or young raccoons.

The red fox is the most common type of fox, and it is found in North America, Europe, Asia, and Africa. Most red foxes have a reddish coat and are about the size of a medium-sized dog.

Foxes and raccoons are almost similar in size, so a fox could potentially kill a raccoon if it is smaller or younger. Additionally, raccoons are nocturnal animals. Some foxes are primarily active during the day, so they are not likely to cross paths very often. But since it’s in the wild, the likelihood of contact is still high.

Last but not least, humans are perhaps the most significant predator of raccoons, but not for food supply. This is because humans have traditionally hunted raccoons for their fur. Raccoon pelts were popular in the Eastern United States during the 19th and early 20th centuries. They are still used for various purposes, including coats, hats, and gloves.

In addition to being hunted for fur, raccoons are also killed because they are considered pests. Raccoons often rummage through trash cans and garbage cans, creating a mess. They also damage property by tearing holes in roofs or walls to get inside buildings.

As a result of these activities, humans sometimes trap, shoot, or kill raccoons to remove them.

Need Help With Raccoons In Your Property?

If you need help with raccoons on your property, contact AAAC Wildlife Removal. We specialize in removing animals that are causing problems for humans, such as by damaging property or getting into garbage cans, without hurting them.

Wildlife control companies like ours provide education and information about living peacefully with animals in urban areas. This can help prevent conflicts between humans and wild animals.