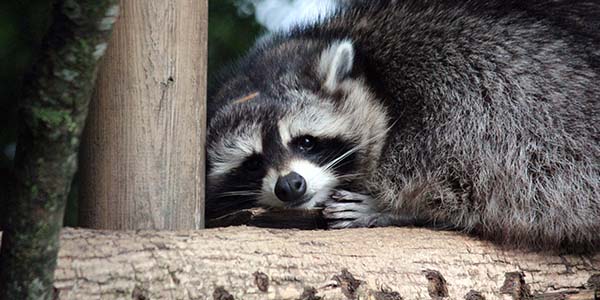 The raccoon is a curious and intelligent animal that can adapt to its environment. This makes it possible for them to survive in many areas, including cities. With thriving population densities, one would think that the common raccoon has a long life. However, the truth is that they have one of the shortest life expectancies of any North American mammal. The average raccoon lifespan is just two to three years in the wild.

The raccoon is not a species that has a large number of young at once. It usually gives birth to between one and five babies per litter, This means that there aren’t many offspring produced each year by a female raccoon. They also don’t typically mate until they are about 15 months old so life expectancy is markedly lower than other mammals. This article will explore raccoon lifespan as well as the factors that influence it.

How long do raccoons live?

The average raccoon lifespan depends heavily on whether or not the raccoons are in the wild or in captivity. In the wild, raccoons have very short lives, young raccoons usually die before they reach sexual maturity (1 year). However, if they make it through the first year, their chances of dying are reduced significantly. Wild raccoons tend to live about three to five years on average but can live up to 16 years.

Life expectancy of raccoons in captivity

In captivity or as domestic animals, the raccoon’s lifespan increases dramatically. With proper care (dietary requirements), habitat (adequate space and climbing structures), and veterinary care; captive raccoons can typically expect between 13-20 years if not longer. This is because their chances of getting injured or contracting disease are far less than in the wild.

Baby raccoons have high mortality rates as they are completely dependent on their mothers for food and protection. As many as 50% of baby raccoons may not survive their first year. If their mother dies at this stage, their chance of survival is virtually zero.

The lifecycle of a raccoon starts with the mating season, which takes place from February till March. During this time males leave their territories to find females ready for breeding. After about two months of gestation, the female gives birth to between three and five kits (also known as cubs). If a female raccoon is not able to give birth during this time, she’ll go through estrus again and can give birth as late as June.

Mothers raise young raccoons for 2 – 4 months. She only leaves the den for short periods of time until they are older. During this time, they teach their young how to survive. This includes foraging skills and climbing techniques that help them scavenge food and evade predators. The young raccoons stay with their mother until 1 year, at which point they head out on their own to find food or mate.

Like many other mammals, raccoons go through several stages throughout their lives: infancy, juvenile, and adulthood.

Born blind and helpless, baby raccoons often weigh less than a pound and are about seven inches long. Their eyes open after around two weeks of age. They develop quickly and are weaned after about two months.

At this point, their mother will introduce them to solid food that she has caught, including insects, small rodents, birds, eggs, and fruits. They still stay with their mother until they reach their first year (adulthood) at which point they leave and explore the world on their own. They typically stay in the area for one more year before venturing out to find a new territory (if they haven’t already done so).

At 1 year, they are now sexually mature and are ready to breed. Most male raccoons leave their birth territory at this point and set out to find a mate. This is also the time when they become more aggressive; fighting with each other for mates, food, and space. The age of adulthood differs slightly between genders; females are fully mature when they reach 1 year while males usually start breeding a bit later.

Factors that affect the lifespan of a raccoon

A raccoon’s longevity is affected by several factors such as human intervention, climate, predators, and diseases.

Humans have had a significant impact on the lifespan of raccoons not just through hunting but habitat loss as well. As cities expand more wild raccoons are being driven out to make space for human homes, businesses, and roads which leads to shorter lifespans as they come across more dangers they would not have to deal with in the wild.

A raccoon living in urban areas is also generally considered more of a pest as they raid and knock over trash cans and make dens inside homes. This leads to them being targeted by homeowners which can result in their death or injury from traps, poisoning, etc.

Furthermore, busy highways in large cities and the fact that raccoons are nocturnal creatures means that they frequently fall victim to collisions with vehicles as they roam at night to look for food.

While raccoons have adaptations that allow them to survive in cold weather, long and extremely cold winters still pose a threat. As raccoons are not true hibernators and still need to come out of their den and find food during the winter, scant food sources and harsh conditions can mean that many raccoons perish during the coldest months.

Prey availability is also a significant factor in climate affecting longevity in raccoons as animals that are unable to hunt effectively due to lack of food will not live long at all.

Distemper is the most common disease that kills raccoons. This virus attacks the respiratory, gastrointestinal, and nervous systems of raccoons which can result in paralysis or even starvation because they are unable to find food on their own. Other viral diseases such as rabies, infectious canine hepatitis, raccoon parvoviral enteritis, and pseudorabies are less common but are still a threat.

There are also bacterial diseases like leptospirosis, yersiniosis, tularemia, Q fever, listeriosis, and pasteurellosis that are known to affect raccoons and further increase their risk of death.

In addition to this, parasitic diseases such as Baylisascarisprocyonis (raccoon roundworm), giardia infection can also reduce a raccoon’s lifespan. Other parasitic conditions that affect raccoons are trichinosis, mange mites (notorious for making the fur of infected animals fall out), fleas and ticks along with ear mites.

Due to their size, an adult raccoon can have few predators beyond humans and other large mammals like wolves or coyotes who are both common in woods where raccoon dens are located. However, it’s important not to overlook smaller potential dangers such as hawks, owls, bobcats, etc., which hunt raccoons when they are young and leave their den for the first time. This can mean much shorter lifespans than expected if they aren’t able to escape fast enough from these predators.

Removal and relocation of raccoons from a home or business is not something that should be handled by an untrained person. In fact, it may be illegal for you to do so in your area without the proper permits and training as raccoons are known to carry diseases that can be transmitted to humans and pets.

One of the main reasons for this is because it can be difficult to tell if a raccoon has rabies; while some cases are obvious, there are also many cases where they show no symptoms at all which means that attempting to remove or relocate them yourself will put you in danger as well as any other people or animals who come into contact with them before they have been properly tested by a veterinarian.

They can also get aggressive when cornered or when their young are threatened, they can scratch or bite which can result in the spread of diseases such as rabies, leptospirosis, and raccoon roundworm.

In order to avoid these dangers, it’s important that you hire a professional wildlife removal company (like us!) We have experience and expertise when removing or relocating any wild animals including raccoons from your home or business. Whether they’re on the roof, under the deck, inside attics, etc., Our job is to humanely remove them without harming the animal – this way everyone remains safe while also avoiding additional damage caused during an amateur attempt at animal control.

The best course of action to take if you have a raccoon problem in your home or business area is to contact AAAC Wildlife Removal. We’ll handle the situation safely and humanely for all involved. We will not only get rid of any current issue with nuisance animals but also help prevent future conflicts from taking place close to where people live or work. Call us today if you are in need of raccoon removal or have any questions!